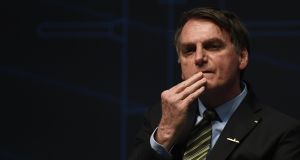 An escalating power struggle within the political party of president Jair Bolsonaro is threatening to destabilise the Brazilian government as it reaches a crucial juncture for its reform agenda.

In the space of two days last week, the Brazilian leader severed ties with two senior politicians within his Social Liberal Party, potentially weakening his ability to pass legislation through an already fractured and cantankerous congress.

The spat has also raised doubts about Mr Bolsonaro’s nomination of his son, Eduardo, to be Brazilian ambassador to the US. Local media outlets Valor and Época on Thursday reported the president had vetoed the proposal amid fears it would not pass a vote in the senate, the upper house of congress.

“We do not take Bolsonaro seriously. The crisis of the day has become the order of the day,” an opposition senator told the Financial Times.

“The [lower] house and the senate are aware that this is a confused and insecure government. If the legislature does not take control, Brazil will collapse.”

The power struggle comes as Mr Bolsonaro faces a vote next week on social security reform and ahead of a forthcoming plan to simplify Brazil’s tax system.

“Reforms are already out of the control of the government,” said Carlos Alberto Melo, a political scientist at Insper.

“The reform agenda depends on a small group in congress. It depends on [house leader] Rodrigo Maia and [senate leader] Davi Alcolumbre. This elite is pro-reforms.”

Out in the open

The political infighting spilled into the open this week when a faction aligned to the Brazilian leader within the Social Liberal Party, or PSL, launched an attempt to replace the party’s leader in the lower house of congress with the president’s son Eduardo.

The bid failed after the target of the attack, Waldir de Oliveira, rallied enough politicians from the PSL – the second biggest party in congress – to his side.

“I am going to implode the president. I campaigned under the sun in 246 cities for this bum,” said Mr de Oliveira about Mr Bolsonaro in a leaked recording after the incident.

Following the failed bid, Mr Bolsonaro then removed Joice Hasselmann from her position as the government’s leader in congress due to her support for Mr de Oliveira. Ms Hasselmann, a politician from the southern state of Paraná, received the most votes of any congresswoman in Brazilian history in 2018.

The attempt to oust Mr de Oliveira came after he ordered allied politicians to obstruct a government proposal on administration reform in the lower house of deputies.

But there is a wider battle being fought for control of the right-wing party and the public funds it receives. Under Brazilian electoral law, parties receive public financing for campaigns.

Police this week raided addresses connected with Luciano Bivar, the party’s long-serving president and an ally of Mr de Oliveira, amid suspicions of illicit campaign financing during the 2018 federal elections. – Copyright The Financial Times Limited 2019