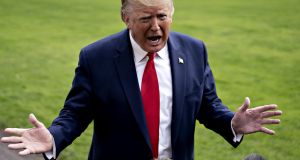 US president Donald Trump: “I did nothing wrong. I had a perfect conversation with the president of Ukraine.” Photograph: Andrew Harrer

Lawyers for former US national security adviser John Bolton are in talks with the House of Representatives about their client possibly testifying in the impeachment inquiry into Donald Trump, according to multiple media reports.

Mr Bolton, a long-time Republican adviser, abruptly departed the Trump administration this summer. Several witnesses who have testified before the committees leading the ongoing impeachment inquiry have said that Mr Bolton was alarmed by elements of the administration’s Ukraine policy, in particular the role played by the US president’s lawyer, Rudy Giuliani.

Former adviser Fiona Hill told lawmakers during testimony this month that Mr Bolton advised her to notify White House lawyers about efforts by Mr Giuliani, as well as US ambassador to the EU Gordon Sondland and acting White House chief of staff Mick Mulvaney, to press Ukraine to undertake investigations.

The possible co-operation of Mr Bolton with the inquiry significantly raises the stakes in the inquiry which is now in its fourth week. House speaker Nancy Pelosi opened the impeachment inquiry last month after details of a phone call between Mr Trump and Ukrainian president Volodymyr Zelenskiy were published.

In the call on July 25th last, Mr Trump asked Mr Zelenskiy to investigate the activity in Ukraine of Hunter Biden, son of Joe Biden, the ex-US vice-president and the leading Democratic candidate for the 2020 US presidential election.

Officials from the three House committees leading the inquiry have indicated that Tim Morrison, a National Security Council official, will testify next week. Mr Morrison was named several times by ambassador to Ukraine Bill Taylor in a statement he provided to lawmakers as part of a deposition on Tuesday.

In addition to Mr Morrison, several other witnesses are scheduled to testify privately, including acting assistant secretary of defence for international security affairs Kathryn Wheelbarger.

On Friday, subpoenas were also issued for two employees of the office of management and budget.

Meanwhile a US judge on Friday granted a request by a House of Representatives committee for access to material redacted from former special counsel Robert Mueller’s report.

Judge Beryl Howell in Washington gave the US Justice Department a deadline of October 30th to hand over the materials to the House Judiciary Committee. The committee’s need for disclosure of the materials “is greater than the need for continued secrecy,” the judge said.

Leaving for an event in South Carolina on Friday, Mr Trump denounced the impeachment inquiry as a “hoax,” perpetrated by the “do-nothing Democrats”.

“I did nothing wrong. I had a perfect conversation with the president of Ukraine,” he said.

He was also pressed on the news that the justice department has begun a criminal investigation into the origins of the Mueller inquiry into Russian interference in the 2016 presidential election, which concluded earlier this year.

While Mr Trump said he would “leave it all up to the attorney general”, he said: “I think you’ll see things nobody would believe. This was the worst hoax in the history of our country.”

Earlier this year, attorney general William Barr appointed a Connecticut judge, John Durham, to investigate the origins of the Russia investigation and the appointment of Robert Mueller as special counsel in 2017 following the firing of FBI director James Comey by the president.

The recategorisation of the department’s inquiry as a criminal investigation could allow investigators to subpoena witnesses and convene a grand jury to draw up criminal charges.

The decision by Mr Barr to open a criminal investigation has prompted accusations by Democrats that Mr Trump is using his own justice department to investigate and potentially delegitimise a process that he frequently dismissed as a “witch-hunt” during the 22-month investigation.