Abu Bakr al-Baghdadi took his life after he was chased down tunnel, US president says 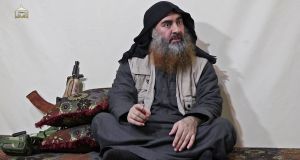 An undated video still of Islamic State leader Abu Bakr al-Baghdadi, who is believed to be dead after a US military raid. Photograph: al-Furqan Media/AFP via Getty Images

The United States will “go after” any new leaders who may emerge following the death of Isis chief Abu Bakr al-Baghdadi, US defence secretary Mark Esper has warned.

Speaking after President Donald Trump confirmed that the 48-year-old founder of Islamic State had died in a US raid on Saturday, Mr Esper said that his death was a “devastating blow” to the terrorist organisation.

“This is not just their leader, it’s their founder,” he said. “He was an inspirational leader in many ways. He formed Isis in 2014, he led to establishing the physical caliphate throughout the region, so this is a major blow to them.”

Abu Bakr al-Baghdadi detonated a suicide vest after a team of elite US military operatives raided a compound where he was hiding in the Idlib province of northern Syria.

Announcing details of the raid at a specially-convened press conference at the White House on Sunday morning, Mr Trump said Russia and Turkey had co-operated with the US on the raid, allowing US military helicopters to fly through areas controlled by both countries. Although the Syrian Kurds had not taken part militarily, he said, they had provided very useful intelligence information to the US. He also thanked Syria and Iraq.

In a lengthy press appearance Mr Trump said the “dangerous and daring” night-time operation had been in train for several weeks.

Eight helicopters helped ferry in several dozen elite US troops who took off from an unnamed base, believed to be in Iraq, about an hour’s journey from the compound where Baghdadi had been located. The commandos blew holes in the outside walls of the compound, having been told that the main entrance had been booby-trapped.

Mr Trump described how Baghdadi was pursued into a tunnel where he then activated his suicide vest, killing himself and three children. A large number of Baghdadi’s “fighters and companions were killed with them,” Mr Trump added, while several other children located in the compound survived. No US soldiers were killed in the raid, though a military dog was injured. DNA tests showed conclusively that Baghdadi had died during the attack, he said.

According to the president, US forces spent about two hours in the compound, collecting highly sensitive material and documents from the raid.

The killing of al-Baghdadi will be seen as a major victory for the US-backed efforts to stamp out Islamic State, particularly given erroneous reports of his death previously.

The self-proclaimed leader of Islamic State, who held a doctorate in Islamic studies, Baghdadi is credited with forming the jihadist group in 2014. The militant organisation conquered wide swathes of Syria and surrounding regions in the early years of the Syrian war, but had been defeated by US-led forces in recent years. The self-proclaimed caliphate unleashed terror in the region, and encouraged thousands of foreign fighters from Europe and elsewhere to join the cause.

While news of Baghdadi’s death was welcomed by both Republicans and Democrats, senior Democrats questioned Mr Trump’s decision not to notify senior congressional figures including House speaker Nancy Pelosi ahead of the action.

“Americans salute the heroism, dedication and skill of our military and our intelligence professionals and acknowledge the work of our partners in the region,” Ms Pelosi said in a statement, though she noted that Russia, but not the top congressional leadership, had been notified of the attack in advance.

“Scores of Isis fighters remain under uncertain conditions in Syrian prisons, and countless others in the region and around the world remain intent on spreading their influence and committing acts of terror,” she said.