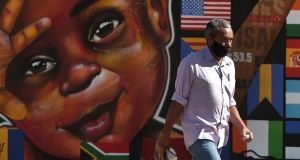 Auditors found that the Brazilian health ministry reduced funding to state and municipal health systems in April when contagion was accelerating across the country. Photograph: AP Photo/Eraldo Peres

Despite being one of the global epicentres of the coronavirus pandemic, Brazil’s health ministry has failed to spend even a third of the emergency funding it has been given to tackle the crisis.

The finding in a report by federal auditors highlights the mismanagement and chaos at the heart of the response to the crisis by the administration of far-right president Jair Bolsonaro, who is self-isolating after contracting Covid-19.

Of the 38.9 billion reais (€6.6 billion) in funding made available in March, only 11.4 billion reais – or 29 per cent – had been spent by June 25th. During that period the disease spread rapidly through the country, claiming more than 55,000 lives.

Since then the total number of deaths has passed 81,000 and more than two million people have been infected, meaning the country is second only to the United States for cases and victims.

Auditors found that the health ministry reduced funding to state and municipal health systems in April when contagion was accelerating across the country. Their findings, obtained by the Folha de S Paulo newspaper, highlighted that states which received the least amount of federal funding, such as Pará and Rio de Janeiro, went on to have some of the country’s highest mortality rates from the virus.

Since the World Health Organisation declared a global pandemic, Mr Bolsonaro has sought to downplay the threat posed by the coronavirus. In April he forced out his health minister over his support for measures to contain its spread and then ousted his successor within a month over his refusal to endorse the anti-malarial drug chloroquine as a treatment for Covid-19.

Since May 15th the ministry has been run by an army general with no experience in public health. The audit also found the ministry was only able to spend a 10th of the resources set aside for it to buy equipment such as personal protection equipment and respirators.

There is also growing evidence that corruption has played a significant role in the failure of authorities to respond adequately to the crisis. The health ministry’s biggest single order, for 15,000 respirators from China, had to be cancelled amidst signs of fraud.

In recent weeks federal police have launched a series of operations targeting corruption by state and municipal politicians and officials across the country.

Last month officers found 8.5 million reais (€1.4 million) in bundles of cash in a property linked to the former state secretary for health in Rio de Janeiro, Edmar Santos. He was arrested as part of an investigation into a scheme to siphon off cash from the state government’s pandemic response. Also under investigation in the case is state governor Wilson Witzel who now faces impeachment proceedings over his role in the affair. More than 12,000 people have died of Covid-19 in Rio de Janeiro.