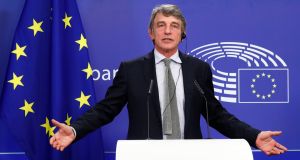 Members of the European Parliament have vowed to challenge the €1.8 trillion budget and recovery fund agreed between European Union leaders this week, and to push for funding increases and greater protections for climate and rule of law.

“We want to improve it above all by responding to the cuts that we find unjustifiable.”

The initial proposal drawn up by the European Commission included significant increases in spending in a number of areas, including on research, climate transition funds, and health spending to improve coordination in Europe and prevent future epidemics.

But in order to find a compromise between the EU member states, these headline figures were cut back significantly, as a group of national leaders led by the Netherlands pushed hard for a thriftier deal.

The European Commission argues that while they did not secure agreement on all the spending that they hoped for, overall the agreement still represents an increase compared to spending in the 2014-2020 period in research, climate transition funds and health spending.

Proposed funding to prevent business insolvency was not agreed, but the commission expressed hope that member states could design their own measures to make up for this.

“There’s no bitterness, yesterday was a success... I think we have managed to cover the gap quite well that was left by Brexit,” an official said. “Of course there is always room for improvement.”

But on Wednesday the parliament’s main political groups backed a motion stating that it “deplores” the reduction in the amount of recovery money due to be available in grants to €390 billion from €500 billion and “does not accept” seven-year budget the Multiannual Financial Framework (MFF) as it stands, while demanding stronger protections for climate and the rule of law.

Prior to the summit, the parliament had threatened to veto the deal if it did not meet its expectations.

The deal must be approved by the European Parliament and formally adopted by a future European Council, as well as requiring the consent of national parliament on one aspect of it.

The presidents of the European Commission and Council, Ursula von der Leyen and Charles Michel, have been summoned to address the parliament and face questions on Thursday.