Melting hot cheese, potatoes and pickles. What’s not to like?

Kitchen Cabinet: Raclette can be made without any special equipment, here's how 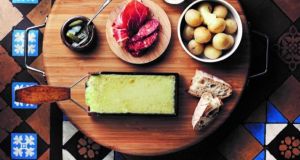 As one of my favourite meals, raclette appears on the tapas board at Chefs Warehouse & Canteen regularly. There are different raclette ovens or grills on the market. However, if you do not own one, this can be done under the grill or over an open fire.

Raclette is a semi-firm cow’s milk cheese most commonly used for melting. It is usually fashioned into a round of 5kg. You can buy a half wheel or a smaller wedge of raclette cheese, preferably from the Valais in Switzerland (Gomser, Bagnes, Orsieres etc), from three to five months old.

I am told that in Ireland, raclette is available at Sheridans Cheesemongers (also online) or at SuperValu. Alternatively, you can experiment with an Irish farmhouse cheese like Durrus or Kylemore Farm.

The term raclette derives from the French word racler, meaning to scrape. Traditionally, the Swiss cow herders used to take the cheese with them when they were moving cows to or from the pasture up in the mountains. In the evenings around the campfire, they would place the cheese next to the fire and when it had reached the perfect softness, scrape it on top of some bread.

The idea is that the raclette should arrive at the table melted and bubbling hot anda be served with peeled baked potatoes, or boiled new potatoes, pickled onions, cornichons and sliced meats.

As soon as it melts, the soft cheese side is scraped with a knife onto a plate. A raclette grill is equipped with small portion pans that are filled with a slice of cheese and placed under the heat. Ideally you should apply the same concept by using small pans or individual ramekins.

Liam Tomlin is a chef and owner of Chefs Warehouse restaurant in Cape Town, South Africa. Irish born Liam was a judge at the Euro-Toques Young Chef of the Year final in 2018.

1 Arrange the charcuterie and raclette on a wooden board. Once the potatoes are cooked, wrap them in a clean kitchen towel to keep them warm. Place the cornichons and onions in small serving jars.

2 Melt the raclette under the grill until bubbling.

3 Cut the potatoes in half and lightly season with salt and freshly ground pepper. Pour the raclette over the potatoes and allow your guests to help themselves to charcuterie and accompaniments.