EU summit: Obstructionism by the 'Frugals' is a lose-lose for everybody

The talks that began on Friday are still ongoing as most of Europe returns to begin its working week. Video: European Council 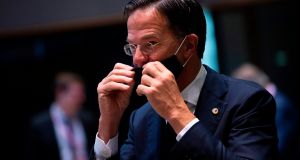 The talks that began on Friday continue as most of Europe begins its working week. The reaction to seeing the talks drag on days longer than planned is broadly negative. “It’s kinda crazy that they’re still debating over this,” a friend messaged. “While Rome burns...” tweeted Sinn Féin’s Eoin Ó Broin.

This is an understandable reaction because it plays into the stereotype of the European Union as slow-moving. But it doesn’t fairly represent what’s going on.

The disagreement is due to serious conflicting ideologies and national interests, not petty squabbles, and the national leaders are not negotiating until 6am for their own amusement. They’re sticking with it because they believe a deal is important.

It’s difficult to reach agreement on a complex €1.8 trillion package that contains both a seven-year EU budget and a once-off, never-before-seen recovery fund to soften the economic impact of the pandemic.

The main hold-up has been that a group of wealthy northern countries led by the Netherlands has blocked agreement, holding out for cuts to the size of the recovery fund and rebates on their budget contributions.

Their obstructionism is a lose-lose strategy.

The group, known as the frugals, is led by the Netherlands. Prime minister Mark Rutte fears being pilloried in national elections next year if he’s perceived to have “given in” to the EU. In the popular debate, the recovery fund is spoken about as if it involves Dutch people giving money to Italians. Rutte cannot win when the basis of the argument is so profoundly disingenuous.

The proposal is that the recovery fund would come from borrowing by the European Commission. This money would be distributed to member states according to need. It would ultimately be repaid in the future through proposed strategic EU-wide levies, such as a plastic tax or levy on imports into the EU based on the carbon released in their production.

Dutch officials talk about the recovery fund as the Netherlands taking on debt, despite it being designed precisely to avoid increasing national liabilities.

It’s true that the borrowing is jointly guaranteed, and it’s a valid question to ask what would happen down the line if the joint EU levies could not be agreed. It would ultimately have to be repaid through national contributions, as with the EU budget.

But this nuance is not part of Dutch debate, in which the myth that the EU involves Dutch people literally paying for Italians to retire at 40 and sip wine on the beach is all-pervasive and unchallenged by the political class.

The Dutch argument also ignores the cost of inaction. The economic fortunes of EU member states are intimately tied together, because they all export to one another. This is particularly true in the case of the Netherlands. If Italy defaults, expect lay-offs in Rotterdam.

And if Rutte succeeds in slashing the size of the recovery fund, does he expect eurosceptics at home to thank him? They will not: he will still have agreed to jointly guaranteed borrowing, which they will cast as a federal power grab by the commission. And whether the grants are €500 billion or €350 billion won’t make a difference if Dutch voters are convinced it’s all money from their pay cheques being sent to Rome.

No doubt Rutte hopes to make political capital out of having put up a fight in Brussels. He is skilled at presenting himself to the electorate as finding a sensible “middle ground”, and perhaps he will succeed in spinning the compromise as such.

But this will come at a cost. Taoiseach Micheál Martin has expressed concerns that if the package is cut too much, it will end up being ineffective for the purpose intended, which is to stimulate the overall EU economy to counteract the effects of a recession of historic scale.

Meanwhile, the frugals will have contributed to the public impression that the EU is failing to rise to the occasion. And they will have burned through their political capital with other member states.

It’s not hard to see the bitterness that has crept into attitudes towards the Dutch. They’ve been called the “new British”. Even for Ireland, which is a natural ally of the Netherlands on several issues including taxation, dislike can grow.

Former Irish ambassador to the EU Bobby McDonagh wrote in this newspaper that the Dutch are often “alone in being entirely convinced by their own rhetoric” and can have a “Calvinist conviction that they are God’s elect”.

When this particular episode is concluded, Rutte will still have to co-operate with his fellow member states. The primacy of geography means their interests are for ever intimately bound.

As long as he feeds and enables the popular domestic myth that the EU is a drain on the Dutch economy, rather than the basis of its wealth, this relationship will continue to be fraught.