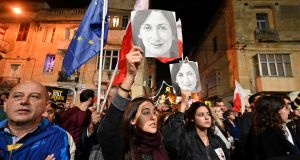 People hold placards and photos of killed journalist Daphne Caruana Galizia during a protest called for by Galizia’s family and civic movements on December 3rd, 2019, outside the police headquarters in Valletta. Photograph: Andreas Solaro/AFP via Getty Images

The self-confessed middleman in the murder of the Maltese anti-corruption journalist Daphne Caruana Galizia has suffered multiple knife injuries to his neck, torso and wrist, hours before he was due to give evidence in the case.

Melvin Theuma, a former taxi driver, was found in a pool of blood at his home on Tuesday evening and was rushed to hospital where he underwent surgery. He is in a stable condition, police said at a press conference on Wednesday morning.

Mr Theuma was granted a pardon in November to reveal what he knew about the car bomb murder that shocked the Mediterranean island in October 2017.

His evidence so far has implicated a businessman, Yorgen Fenech, the alleged mastermind who was arrested in late November and accused of complicity in the murder. Mr Fenech is awaiting trial and denies the charge.

The indications were that the injuries were “self-inflicted”, Malta’s police commissioner, Angelo Gafà, told reporters. There were no “defensive wounds” and blood splatter patterns indicated self-injury.

There were no reports of a struggle and no one reported hearing any commotion. All openings at Mr Theuma’s home were closed except for a shaft window.

The bookmaker and taxi driver, who lives with family members, was at home alone at the time of the incident. He has been under 24-hour police guard since last year. An officer stationed outside the house entered after being alerted by Mr Theuma’s lawyer, who said she could not reach her client by phone.

Mr Theuma was expected in court in Valletta on Wednesday for the latest in a long series of hearings and had been preparing for the session with his lawyer until 6pm on Tuesday.

Mr Theuma is considered at risk of assassination and has been given a high level of police protection, with armed officers accompanying his journeys to and from court since he began giving evidence last year. Officers had previously been stationed inside his home but this was discontinued at Mr Theuma’s request because of “privacy”, Mr Gafà confirmed on Wednesday.

The incident has triggered renewed calls for Europol to formally join Malta police in investigating Caruana Galizia’s murder. Her family and campaigners have called for a joint investigative taskforce between the agency and Malta police.

Repubblika, the Maltese NGO, released a statement saying: “This is enough. We do not want the mafia of money and interests controlling Malta. The authorities have done what they are capable of: nothing. We are reiterating our appeal for a joint Europol-Malta investigating team to bring to justice the mafia that is suffocating Malta.”

Dutch MEP Sophie in’t Veld, who has campaigned against corruption in Europe’s smallest member state, said the incident should be “immediately investigated”, adding: “The government must show its full commitment to the rule of law.”

Calls for a joint investigative taskforce were rejected by Mr Gafà, who told reporters it “offered no solution”, but that Europol would continue to assist with the investigation. The agency has been providing forensic and technical support since October 2017.

Insp Arnaud was told by Mr Theuma his injuries were caused by “self-harm” and that he was alone during the incident, Mr Gafà said. He added that police were investigating reports of a noose found hanging from a traffic sign alongside the law courts building on Monday morning.

Mr Theuma claims he acted as go-between, paying three men who are accused of planting the car bomb that killed Caruna Galizia, allegedly on the orders of Mr Fenech.

Mr Theuma also described how he has since lived in fear of his life and how he had gone to a seminary for confession. “My life ended at 3pm on October 16th, 2017,” he told a magistrate, referring to the time and date of the murder.

1 Man unidentified in psychiatric hospital for 30 years may have DNA taken
2 Miriam Lord: Another dog’s dinner as D’Arcy jumps on the gravy train
3 ‘Insane’ gathering of hundreds of students in Galway condemned
4 US election: Everything you need to know about Tuesday’s presidential debate
5 Covid-19: One death and 363 further cases confirmed in State
Real news has value SUBSCRIBE