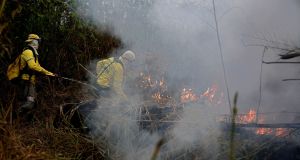 Firefighters work to put out fires along the road to Jacunda National Forest, near the city of Porto Velho in Brazil’s Amazon region. Photograph: Eraldo Peres/AP

Brazil’s president, Jair Bolsonaro, says he will only consider accepting an aid package to help put out fires raging across the Amazon rainforest if his French counterpart, Emmanuel Macron, takes back his “insults”.

Mr Bolsonaro’s senior aides said earlier he would snub the plan in an escalation of his war of words with Mr Macron, who launched the initiative.

“First of all, Mr Macron must retract the insults he gave me. First, he called me a liar. Then, the information I had is that our sovereignty is up for grabs in the Amazon,” Mr Bolsonaro told reporters on Tuesday. “So, before talking or accepting anything that comes out of France’s best possible intentions, he will have to take those words out and then we can talk”.

On Monday, at the G7 summit in France, Mr Macron announced a two-stage plan for the Amazon – first to extinguish fires raging in the rainforest with $20million (€18 million) in aid from G7 nations, and then to reforest and protect what he called “the planet’s lungs”.

“The Amazon forest is a subject for the whole planet,” Mr Macron said. “We can help you reforest, but we cannot allow you to destroy everything.”

Mr Bolsonaro said on Twitter the same day: “We cannot accept that a president, Macron, unleashes unreasonable and gratuitous attacks on the Amazon, while disguising his intentions behind the idea of an ‘alliance’ of G7 countries to ‘save’ the Amazon, as if we were a colony or a no man’s land.”

“After all, respect for the sovereignty of any country is the least that can be expected in a civilised world,” he added.

Mr Bolsonaro made it clear that the crisis in the Amazon was an issue of national sovereignty for Brazil and that he was wary of foreign interests in the world’s largest tropical rainforest. “What do they want there?” he asked.

Onyx Lorenzoni, Mr Bolsonaro’s chief of staff, told the popular Brazilian G1 news website that his government “appreciates” the offer, “but maybe those resources are more relevant to reforest Europe? Macron cannot even avoid a foreseeable fire in a church that is a world heritage site”, he said, referring to the fire that ravaged Notre-Dame Cathedral in Paris in April.

The bitter dispute between the French and Brazilian leaders erupted last week when Mr Macron said Mr Bolsonaro had “lied” to him about his environmental promises. As the Amazon burned, some European countries, including France and Ireland, threatened not to ratify the EU-Mercosur trade agreement, of which Brazil is the most important South American participant. Deforestation has also accelerated since Mr Bolsonaro took office.

On Monday, Mr Macron responded angrily to insults aimed at his wife Brigitte in a Facebook post by Mr Bolsonaro. “It’s sad, but it’s sad first of all for him and for all Brazilians ... I hope very soon they will have a president who behaves in a way that measures up,” the French president said.

Analysts said Mr Bolsonaro’s criticisms of protected areas and enforcement agencies have led to the weakening of environmental safeguards. Christopher Garman of Eurasia Group, a consultancy, noted that “enforcement of environmental legislation will remain a challenge for the administration. The federal government’s decision to suspend a series of environmental initiatives makes for a difficult and lengthy turnaround in improving environmental protection”. – Copyright The Financial Times Limited 2019