US must lift all sanctions before talks, says Rouhani, after G7 summit suggested progress 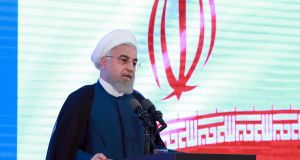 Iran’s president Hassan Rouhani: “If [Mr Trump] just wants to take photo with Hassan Rouhani that would not be possible.” Photograph: AFP/Getty Images

Iran’s president Hassan Rouhani has ruled out holding talks with Donald Trump until the US has agreed to lift all its sanctions on the Islamic republic, warning that he would not take part in a photo opportunity.

Mr Rouhani made the comments on Tuesday in a speech on state television, a day after French president Emmanuel Macron suggested at the G7 summit that he could broker a meeting between the Iranian and US leaders. Mr Trump said at the summit in Biarritz that “if the circumstances were correct I would certainly agree” to meet Mr Rouhani.

But Iran, which accuses the Trump administration of waging an economic war against the country, played down the prospects of negotiations. Mr Rouhani said there would be no “positive development” until the US removed sanctions.

“Iran is seeking a resolution to the problems through reasonable means rather than taking photos,” Mr Rouhani said. “If [Mr Trump] just wants to take photo with Hassan Rouhani that would not be possible.”

Mohammad Javad Zarif, Iran’s foreign minister who met Mr Macron on the sidelines of the G7 summit, said he had told French officials that any meeting between Mr Rouhani and Mr Trump was “unimaginable”.

Washington and Tehran have been locked in a stand-off since Mr Trump unilaterally withdrew the US from the 2015 nuclear accord Iran signed with world powers and imposed crippling sanctions. Iran has responded by increasing its nuclear activity and exceeding the limits on key elements of the accord.

France has been working with the UK and Germany – the European signatories to the agreement – to try to save the deal and de-escalate tensions in the Gulf.

At the G7 summit, Mr Macron, who had spoken by phone with Mr Rouhani, suggested there could be a meeting between the Iranian and US leaders within weeks.

“I prefer to talk of a concerted initiative rather than mediation,” Mr Macron said. “Nothing is done. Things are very fragile,” he said.

An EU spokesperson said on Tuesday that the bloc would “support and welcome any diplomatic efforts to find the way out of the crisis, de-escalate the situation in the region and preserve the [nuclear deal]”.

One senior European diplomat said the Macron initiative appeared to reflect a variety of motives, including to save the accord, defuse the Gulf crisis, further his growing authority in the EU, and road-test a way of working with Mr Trump. But the official warned that it was not clear what Iran was being offered to come to the negotiating table.

“I think Macron is very keen to get movement on this for a number of reasons. But without concrete action I do not see any reason why it would provide Iran the incentive to sign up,” the diplomat said.

Mr Trump had hinted at the G7 meeting that he could be willing to relax his “maximum pressure” strategy against Iran. Washington has vowed to drive Iran’s exports to zero, but Mr Trump on Monday suggested that states could club together to provide Tehran with an emergency credit line backed by its crude production.

“But they may need some money to get them over a very rough patch and if they do need money, and it would be secured by oil . . . so we are really talking about a letter of credit,” he said in Biarritz. “It would be from numerous countries.”

Tehran has repeatedly insisted it can “resist” the US pressure. But the sanctions have pushed Iran into a deep recession and caused its oil exports to plummet from about 2.8m barrels per day in mid-2018 to less than 500,000 bpd.

Any talks with Mr Trump would have to be approved by Ayatollah Ali Khamenei, Iran’s supreme leader, who has the final say on all state matters. Mr Khamenei has ruled out negotiations with the Trump administration, describing any such talks as “double poison”.

The US pressure on Iran has emboldened regime hardliners who feel vindicated in their criticism of the nuclear deal and a weakened Mr Rouhani, a pragmatist who sealed the accord in his first term.

Hossein Shariatmadari, editor of Kayhan, a state-run newspaper viewed as the hardliners’ mouthpiece, wrote on Tuesday that a meeting between Mr Trump and Mr Rouhani would be “madness”.

“The nuclear deal is the most obvious outcome of your meetings and talks with the US, which no one – I insist no one – has the least doubt was a disaster,” he said.

Mohammad Ali Abtahi, a reformist vice-president, said Mr Rouhani should be wary of being seen to positively react to the notion of talks with Mr Trump, saying the Iranian leader could fall into a “major political trap”. – Copyright The Financial Times Limited 2019