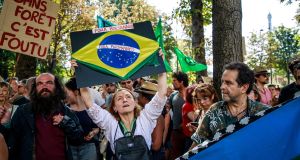 Protesters against the destruction of the Amazon rainforest shout slogans against Brazilian president Jair Bolsonaroin front of the Brazilian embassy in Paris on Friday. Photograph: Christophe Petit Tesson/EPA

France has joined Ireland and other EU nations in threatening not to ratify one of the world’s biggest trade deals unless Brazil does more to fight fires in the Amazon rainforest, with President Emmanuel Macron saying that Brazil’s Jair Bolsonaro had “lied” about his environmental promises.

The threats to the trade pact between the EU and South America’s Mercosur bloc came as Mr Macron and other world leaders said the fires in the Amazon should be discussed urgently at this weekend’s G7 summit in France.

Taoiseach Leo Varadkar has also called into question the EU’s trade deal with Mercosur, which is dominated by Brazil. Finland, which holds the EU’s rotating presidency, called for the bloc to examine the possibility of banning Brazilian beef.

Sigrid Kaag, the Netherlands trade minister, said the EU should use the Mercosur deal to “exert pressure, if needed” on the region’s governments. “We need to be smart and strategic about it,” Ms Kaag said. “It’s absolutely tragic to see what is happening.”

However Germany’s government distanced itself from Mr Macron’s threat, saying that not to ratify a deal with Mercosur “would not lead to less rainforest in Brazil being cleared” and would “not be the appropriate response to what is currently happening in Brazil”.

Earlier, Mr Bolsonaro accused the French president of having a colonial mindset and said Mr Macron was seeking “personal political gain” at the expense of Brazil and the other countries of the Amazon.

The row stepped up the political tension over the thousands of fires in the Amazon. According to the Brazilian government’s own satellite data, the number of outbreaks so far this year has reached more than 74,000, up 84 per cent from the same period last year and the highest since records began in 2013.

The Elysée Palace said: “Given the attitude of Brazil in recent weeks, the president of the republic [Mr Macron] has to conclude that President Bolsonaro lied to him at the [G20] Osaka summit.

“President Bolsonaro has decided not to respect his commitments on the climate nor to take action on biodiversity,” it said. “In these conditions, France is opposed to the Mercosur accord.”

Mr Varadkar on Thursday accused Mr Bolsonaro of an “Orwellian” attempt to blame the fires on environmental non-governmental organisations, after Mr Bolsonaro said he was suspicious that they could be involved. The Taoiseach said there was “no way” Ireland could support the trade agreement if Brazil did not honour its environmental commitments.

British prime minister Boris Johnson said he was “deeply concerned by the increase in fires in the Amazon” and called for international action to protect rainforests.

“The prime minister will use the G7 to call for a renewed focus on protecting nature and tackling climate change together,” a spokesman said.

Mr Bolsonaro, a former army captain who has said Brazil lacks resources to fight the fires, said the military might be brought in to help.

Speaking to the Financial Times last week, Ricardo Salles, Brazil’s environment minister, said the Amazon needed to be opened up to more legal commercial activities and suggested that EU countries might use “the environmental scenario to pressure Brazil or Mercosur to obtain more gains or more favourable conditions for the EU”.

Mr Macron has faced intense opposition from French farmers, and even from members of parliament from his own political party, to the planned Mercosur accord, which would offer much better access to EU markets for Brazilian farmers. The deal was agreed in June after 20 years of talks, but needs EU ratification.

“Our home is on fire. Literally,” Mr Macron said on Twitter ahead of the G7 meeting he will host in Biarritz. “The Amazon, the lung of our planet which produces 20 per cent of our oxygen, is ablaze. It’s an international crisis. G7 members, we meet in two days to discuss this emergency. #ActForTheAmazon.”

Climate change and the environment will be among several international crises to be discussed at a divided G7, which brings together the world’s rich democracies: the US, Japan, Germany, France, the UK, Italy and Canada.

Mr Macron’s plea for the Amazon was endorsed by Justin Trudeau, the Canadian prime minister. “I couldn’t agree more,” he said on Twitter. “We did lots of work to protect the environment at the #G7 last year in Charlevoix, & we need to continue this weekend. We need to #ActForTheAmazon & act for our planet - our kids & grandkids are counting on us.”

US president Donald Trump, who is seen as an ally of Mr Bolsonaro and who repudiated the Paris climate agreement designed to limit global warming caused by greenhouse gas emissions, is likely to be less enthusiastic.

Last year, Mr Trump withdrew US approval for the final communiqué of the G7 summit hosted by Canada because he was enraged by Mr Trudeau’s comments on the trade dispute between the two countries. – Copyright The Financial Times Limited 2019

1 ‘I thought it was a hoax’: Patient dies after Texas Covid party
2 Maureen Dowd: Biden has his limitations but he’s no Trump
3 Immunity to Covid-19 could be lost in months, study suggests
4 Quarantine process to be tightened as health officials grow nervous
5 Dirty money: How the Mafia plundered Italy’s public health system
Real news has value SUBSCRIBE