‘There’s no need for all this outrage.’ Many in the Amazon defiant over fires 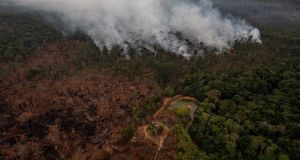 Seeing the global panic over thousands of forest fires in the Amazon last week, and hearing the calls to boycott Brazilian products, Agamenon da Silva Menezes wondered if the world had gone mad. Da Silva is a farmers’ union leader in Novo Progresso, a community in a heavily deforested state in northern Brazil, and he considers the fires burning in the region a normal part of life. It’s how some farmers clear land to make a living, and a natural result of the dry season.

In Novo Progresso, as in many parts of Brazil, there is strong support for President Jair Bolsonaro’s policy on the Amazon, which prioritises economic development over environmental protections. These Brazilians argue that fire and deforestation are essential to keep small farmers and large ranches that export beef and soy to the world in business, and that the damage they do to the world’s largest rainforest is modest.

Further, they are indignant at what they see as a colonialist attitude by outsiders trying to decide how Brazilians should steward their own land. Bolsonaro himself said on Monday that Brazil would not accept demands to “save the Amazon, as though we were a colony or no man’s land”.

Earlier this month, a group of farmers, loggers and business owners in Novo Progresso and elsewhere announced they would be setting co-ordinated fires as a show of force by industries that resent enforcement of environmental laws.

The global outrage has been set off by the more than 26,000 forest fires recorded in the Amazon so far this month – the highest number in a decade. And it has found a target in Brazil’s contentious leader, Bolsonaro, who has vowed to make it easier for industries to gain access to protected lands.

The Amazon fires were a prime concern of the Group of 7 leaders who gathered in Biarritz, France, last weekend. Spurred by President Emmanuel Macron of France, who last week warned that “our house is burning,” G7 countries pledged to earmark $20 million to help Brazil contain the fires. Actor Leonardo DiCaprio also announced that Earth Alliance, an environmental organisation he helps lead, had pledged $5 million in funding to protect the Amazon.

Agriculture has long been a mainstay of Brazil’s economy – and farming and fires here often go hand in hand. Most are controlled blazes intended to clear land for crops and cattle grazing. But deforestation has been surging in Brazil as Bolsonaro has relaxed enforcement of environmental laws and land grabbing has risen.

The fires tearing through vast swathes of the Amazon region this year are one result, experts say. As the world’s largest rainforest, the Amazon is home to a fifth of the Earth’s supply of fresh water. And it serves as an important “carbon sink”, soaking up carbon dioxide and helping keep global temperatures from rising.

That has led many world leaders and environmentalists to see the Amazon as an invaluable piece of world heritage that must be zealously conserved. But that claim has long bothered many residents of the Amazon, and enraged nationalist politicians like Bolsonaro, a far-right former army captain who bristled at the idea that protecting the rainforest is a global imperative.

Andre Pagliarini, a Brazilian historian, said that international pressure to conserve the Amazon may backfire if it stokes fears that wealthier nations want to keep the Amazon pristine to stymie Brazil’s growth – or to appropriate its wealth for themselves. That view was prevalent when the country’s military rulers set in motion an ambitious development plan for the rainforest during the 1960s and 1970s.

“All this talk of foreign collaboration in preserving the Amazon may be well-intentioned, it may be genuine, but it touches a raw nerve in Brazil: the notion that wealthier foreigners want to chip away at Brazil’s authority over the Amazon,” said Pagliarini.

Gelson Dill, the deputy mayor of Novo Progresso, traces his roots in the area to the 1970s, when his family was among thousands that heeded the call of military leaders to settle in the Amazon and develop the land by cutting down forest.

“We have to remember that the people who came here from the south, the northeast, the southeast, were brought here by the federal government, which called on people to come occupy this region,” Dill said. “Then it abandoned the people here and now it wants to call these people criminals.”

During the 1980s and 1990s, the Amazon began shrinking gradually as farmers, miners and loggers cleared swathes of land to grow crops, raise cattle or sell property. It was a way to make money in a region with high rates of unemployment, tremendous poverty and little presence of the state.’

“What’s the scheme? You appropriate land and sell it,” said Maurício Torres, a professor at the Federal University of Pará, a northern state that includes Novo Progresso. “The land is made 50, 100, 200 times as valuable once it has been deforested. It’s an excellent business. You’re selling public land, right, so it’s all profit.”

But as Brazil created a vast patchwork of national reserves and indigenous territories starting in the 1980s, it became harder to appropriate land. During the 2000s, as deforestation soared, the Brazilian government set in motion an ambitious plan to slow down the rate at which the rainforest was being destroyed. But that effort, which relied heavily on aggressive law enforcement operations, has lost traction in recent years.

A languishing economy pushed thousands of unemployed people deep into the forest. As a deep recession dragged on, the country’s reliance on the powerful agricultural sector grew, as did that sector’s political muscle in Congress. Gradually, the government eased pressure on lawbreakers.

Many in the Amazon – and their representatives in Brasília, the capital – believe that strict rules to protect the forest are holding the country, and the local economy, back. With his pledges to curb environmental protection, Bolsonaro won 52 per cent of the vote in the northern states that encompass the Amazon.

“The abandonment of the people in these regions pushed them to a relationship of dependence with land grabbers and illegal loggers,” Torres said. “They end up serving as a social shield to local criminal organisations.”

Hélio Dias, the head of the Agriculture Federation in Rondônia, one of the states that was hit hardest by the fires, said Brazil has designated too much of its territory as protected lands.

“If we were to designate 40 per cent of land for production and conserved 60 per cent, that would be ideal for producers,” he said. “That would represent an equilibrium between man and the forest.”

Dias said this year’s fires have been unusually widespread, which he said has caused property damage and other problems for growers. But he attributes the fires mainly to drought, and scoffed at the notion that it justifies a boycott of Brazilian products.

“It is completely misguided,” he said. Living in the Amazon is hard, he said. Mobility is difficult and expensive, access to healthcare is scarce and there are few options for leisure. “We just try to produce so that our families get by,” he said.

Some residents in fire-scarred areas expressed alarm. José Macedo de Silva, a cattle farmer near Porto Velho, the capital city of Rondônia, said most of the fires in his area were started by people involved in land disputes.

“I’m against illegal deforestation, against invading environmental protection areas,” he said, as he stood by a patch of his own land that had been scorched. “People who do that need to be punished. Brazil is going to pay the price over our incompetence in dealing with these people.”

Environmental groups and indigenous activists say that land grabbing and deforestation has become increasingly brazen since Bolsonaro came into office. When a prosecutor warned the main federal environmental agency earlier this month that a group of men were planning to set a series of blazes along a main road in the Amazon to intimidate environmental enforcement personnel, the agency’s officials replied that they lacked the resources to stop it.

Da Silva, the farmer leader in Novo Progresso, believes Bolsonaro should stay the course, and not bow to pressure from European leaders or give in to threats of boycotting Brazilian goods.

“We’re not going to surrender control of the Amazon and that’s a fact,” he said. “We have cheap, good quality products to sell. If they don’t want to buy them, we’ll sell to China and other places.” – New York Times