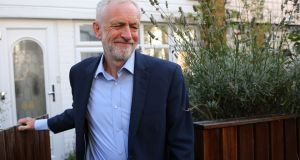 UK opposition parties agreed on Tuesday to move as early as next week to block a no-deal Brexit and prioritise using legislation to try to block prime minister Boris Johnson from leaving the EU without a deal at the end of October.

After a two-hour meeting, MPs from various parties, including Labour, agreed the joint approach – leaving the alternative proposal for a vote of no confidence as a fallback “nuclear option”.

The agreement means that Jeremy Corbyn, the Labour leader, has – for now – in effect abandoned hopes of toppling Mr Johnson and succeeding him as a caretaker prime minister.

According to one participant at the opposition parties’ meeting, held in Mr Corbyn’s parliamentary office, those involved could try to engineer a vote in the House of Commons as early as next week. “Speed is of the essence,” he said.

Separately, 160 anti-Brexit MPs on Tuesday signed the Church House Declaration – named after the building where they met – vowing to hold an alternative parliament if Mr Johnson suspends the House of Commons to force through a no-deal Brexit.

In a statement, Labour insisted that the various opposition parties were still open to either a vote of no confidence or passing legislation. But other opposition MPs made clear that they preferred to use the legislative route.

Green Party MP Caroline Lucas said that a vote of no confidence would be “risky”. “It could enable Boris Johnson himself to seize the moment and try to hold an election that would happen after October 31st so we could be crashing out of the EU during an election campaign,” she said.

Adam Price, leader of Plaid Cymru, said the parties had agreed that a vote of no confidence was one of several issues that could be “parked ... for another day”.

Other opposition figures argued that no Tory MPs would agree to hold a vote of no confidence. They fear that it could lead to a “hard left” Labour government and Mr Corbyn in Downing Street – even in a caretaker capacity ahead of an early election.

The opposition MPs said they would work together to prevent Mr Johnson from suspending parliament through “prorogation” and also to try to force the House of Commons to sit during the party conference season. They agreed to set up a new contact group to work together on tactics in the coming days.

The main figures working to block a no-deal Brexit include several Europhile former Conservative ministers, such as Oliver Letwin and Dominic Grieve. They have been joined in recent weeks by former ministers from the Theresa May administration, including former chancellor Philip Hammond.

However no Tory MPs attended Tuesday’s meeting, with several citing diary commitments for their absence.

Opponents of a no-deal Brexit have drawn up drafts of a bill that, if passed, would force the prime minister to extend Article 50, delaying Brexit.

They then have one of two options on how to push the legislation through the Commons. The first is by using a “Standing Order 24” to organise an emergency debate. The second is by trying to amend a government report due in September about efforts to restore Northern Ireland’s devolved administration at Stormont, to express MPs’ opposition to a hard Irish border in the event of a no-deal Brexit.

Sir Keir, speaking earlier on the BBC’s Today programme, admitted there would have to be “give and take” if pro-EU Tory rebels were to vote in the same division lobbies as Labour, the SNP, Liberal Democrats and other smaller parties to halt a no-deal Brexit.

“We have got one week to make sure as far as possible we have a plan that is effective and we can put into action,” he said. Sir Keir added that passing a law to prevent a no-deal exit could be “direct and effective”.

Liberal Democrats leader Jo Swinson agreed that the “strongest option” would be to pass a law requiring Mr Johnson to seek an extension of the Article 50 exit process – allowing time for a second EU referendum or election. But she said any plan would have to be legally watertight so that it did not “come apart at the last minute”.

Senior officials in the Johnson government described Mr Corbyn’s decision to work with other MPs to stop a no-deal Brexit as “utterly perverse”.

“We are now making progress because our European partners realise we are serious about leaving the EU on October 31st, no ifs, no buts,” a No 10 aide said.

“It’s utterly perverse that Corbyn and his allies are actively seeking to sabotage the UK’s position. This coalition of anti-democrats should be honest with the British public: they are against us leaving the EU no matter what. The government believes politicians don’t get to choose which public votes they respect.” – Copyright The Financial Times Limited 2019