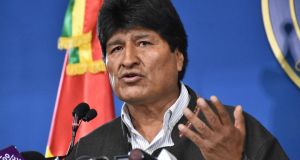 When it eventually came, the end was swift for Evo Morales. Once the Organisation of American States said early on Sunday morning that its team of auditors had found evidence of “clear manipulation” in last month’s disputed election, the Bolivian president’s last remaining defences against a rising tide of protest gave way.

By Sunday evening he had quit, along with the next three people in the line of succession, all from his Movement Towards Socialism (MAS) party, which said it was the victim of a coup. The resulting vacuum only intensified the chaos on the street and in the corridors of power. After a night of violence Bolivians woke up on Monday morning still unclear as to who was now leading the country.

But if the end came quickly, this was a crisis years in the making.

Even though his quest for an unprecedented fourth consecutive term ended in debacle, Morales’s 14-year stint in office is still four more than the next longest, back in the 1830s.

This fuelled the perception even among former supporters that the MAS was seeking to perpetuate itself in power for ever, a feeling that intensified after a referendum in February 2016 saw Bolivians reject the idea of allowing Morales to run again this year. It was the first major setback for his political project since winning power in 2005, and he duly ignored it.

It ended up being a grave misstep, energising as it did the previously demoralised and fragmented opposition. Had Morales not run in October’s election and instead handed office over to a successor, he would have gone down in history as one of Bolivia’s most successful presidents ever. He was his country’s first indigenous leader since the Spanish Conquista, who combined sound economic management with greater social and racial inclusion in one of Latin America’s most fractured societies.

By taking another path, Morales and MAS have repeated some of the most basic historical errors of Latin American populists. They have confused their party with the people and fallen into the trap of excessively personalising politics. In recent years Evo, as he is widely known, showed increasing signs of believing his own cult of personality, which MAS has promoted in part because of its failure to cultivate a politically viable successor.

More cynically MAS, like many corrupt administrations in the region, probably feared the legal consequences of losing power.

According to anti-graft watchdog Transparency International, corruption has remained endemic in Bolivia under MAS and several scandals have come close to Morales himself. It is the sort of context in which South America’s democratic norms come under pressure.

But if Latin populists persist in repeating the same mistakes in office, their fortunes keep being revived out of it because their opponents insist on making their own.

On Sunday Morales’s vice-president quoted the 18th-century Indian rebel Túpac Katari, who at his execution said: “We will return and we will be millions.” It was not necessarily mere bravado in a moment of defeat.