Johnson welcomes Farage’s move to stand down in Tory seats

Brexit Party leader Nigel Farage has said that his party will not contest the Tories, led by British PM Boris Johnson, in 317 seats in order to prevent a second referendum on leaving the European Union. 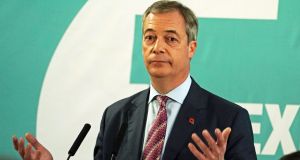 Brexit Party leader Nigel Farage speaking in Hartlepool on Monday. “What we will do is concentrate our total effort into all of the seats that are held by the Labour Party, who have completely broken their manifesto in 2017.” Photograph: Owen Humphreys/PA Wire

Boris Johnson has welcomed the Brexit Party’s decision not to contest any of the 317 seats won by the Conservatives in 2017, describing it as a recognition that a hung parliament was the greatest threat to delivering Brexit. He said he had “absolutely not” done a deal with Nigel Farage before the Brexit Party leader made his announcement in the northeastern town of Hartlepool.

“I’m glad that there is a recognition that there is only one way to get Brexit done and that is to vote for the Conservatives,” Mr Johnson said.

Mr Farage said he decided to stand down more than half of his party’s 600 candidates because he feared that, by splitting the Leave vote in the south of England, they could help to elect dozens of Liberal Democrat MPs who would vote for a second referendum.

The Brexit Party leader has repeatedly rejected Mr Johnson’s Brexit deal as a failure to deliver on the 2016 referendum. But in Hartlepool on Monday, he said he had been reassured by a video message the prime minister released on Sunday promising to seek a bare-bones trade deal with the EU and ruling out an extension of the post-Brexit transition period beyond December 2020.

“Ever since Mrs May’s abject speech in Florence, we have been aiming at a close and special partnership with the European Union. We had been aiming to stay part of many of its agencies,” Mr Farage said.

“Boris last night signalled a very clear change in direction. I thought to myself overnight, ‘That sounds a bit more like the Brexit we voted for’.”

The Brexit Party will contest seats in England, Scotland and Wales held by Labour and other opposition parties and Mr Farage said the best way to ensure that Mr Johnson keeps his promises will be for some of the party’s candidates to win seats.

“We are going to keep saying: remember you told us we were leaving at the end of 2020,” Mr Farage said.

“Remember you told us we’re not going to have political alignment. He will know, just as Mrs May’s vote disappeared in the European elections of this year, the same will happen again if a British prime minister breaks firm commitments and promises made to the British people.”

The Liberal Democrats said Mr Farage’s move confirmed that the Conservatives and the Brexit Party were now one and the same. Scotland’s first minister Nicola Sturgeon said that any Brexit deal acceptable to Mr Farage will be “deeply damaging to Scotland”. And Labour leader Jeremy Corbyn described the Brexit Party’s decision to stand aside in Conservative-held seats as “a Trump alliance”.

“One week ago Donald Trump told Nigel Farage to make a pact with Boris Johnson. Today, Trump got his wish.This Trump alliance is Thatcherism on steroids and could send £500 million a week from our NHS to big drugs companies. It must be stopped,” he said.

Brexit Party supporters in Hartlepool applauded when Mr Farage announced his new electoral strategy. But Wayne Bayley, who had been due to fight the Conservative-held seat of Crawley for the Brexit Party, said he was disappointed to see Mr Farage “bottle it” and back the prime minister’s deal.