Tánaiste says proposals are ‘not consistent’ with Stormont agreement between governments 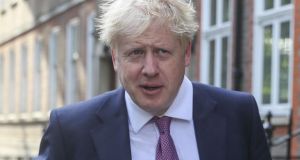 Boris Johnson has pledged to change the law to protect British armed forces veterans from vexatious legal action as he announced a raft of measures to support military personnel.

The UK Conservative Party say it wants to end “unfair trials” of veterans where no new evidence had been produced and the accusations had been questioned exhaustively in court.

However, Tánaiste and Minister for Foreign Affairs Simon Coveney said he was “worried” by the talk of an amnesty.

Speaking to journalists in Brussels on the fringes of a foreign ministers’ meeting he said that the proposals were not “ consistent with what is in the Stormont House Agreement which I think should be setting the parameters for the way forward because that is the basis on which everyone expects us to move forward”.

Mr Coveney said that the proposals may just be part of an election campaign, though they had yet to appear in manifestos, but that there was already in the Stormont House Agreement “an agreement between both governments and the parties in Northern Ireland about how to progress to manage very sensitive legacy issues and to move a process of reconciliation forward.”

It does not contain provisions for “amnesties for any one sector within Northern Ireland or people who were involved in breaches of the law during the Troubles. I think it is important that a process of reconciliation and legacy move ahead in a way that is consistent with what has been agreed”.

Under the proposals, the UK Conservative Party said it would introduce legislation to ensure the Law of Armed Conflict has primacy and that peacetime laws are not applied to service personnel on military operations.

It said if it won a majority it would amend the Human Rights Act so it does not apply to issues — including deaths during the Troubles — which took place before it came into force in 2000.

The pledge is among a package of measures the party is proposing to support military personnel, veterans and their families.

The Tories want to guarantee veterans a job interview for any public sector role they apply for in a bid to tackle stereotypes that might hold servicemen and women back from employment.

They would also provide British ministry of defence funded “wraparound” childcare with breakfast and after school clubs to cover early starts and late finishes for working military parents of children aged four to 11 years old.

And they will provide a one-year employers’ national insurance contribution holiday for all UK companies that hire veterans in the first year after they have left service.

It follows a pledge from the party over the weekend to make veterans eligible for a railcard giving them a third off the cost of train travel.

Mr Johnson, who will visit the Black Country on Monday to mark Armistice Day, said his government would “always support” the British armed forces.

“As we remember the ultimate sacrifice made by our brave men and women for their country just over a century ago, it is right that we renew our commitment to the soldiers, sailors, marines, airmen and veterans of today,” he said.

“These measures will mean more childcare support for those who are currently serving. And it will mean that we harness the enormous contribution that veterans can make to our businesses and public sector organisations.

“If I’m elected on the 12th December, I want the message from my government to our armed forces to be louder and clearer than ever: we salute you and we will always support you.”

Defence secretary Ben Wallace added: “In the days of advanced technology and automation it is easy to forget that the most important equipment in the armed forces are the men and women serving.

“This policy demonstrates our commitment to them and is a recognition of the pressures they face.”– Additional reporting PA