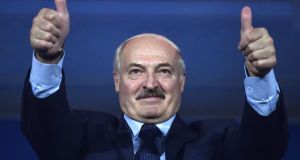 Belarusian president Alexander Lukashenko flew to Austria on Monday for a rare visit to the European Union, as the West sounds out the veteran autocrat on his country’s plans for a so-called union state with Russia.

It will be Mr Lukashenko’s first trip to the EU since it lifted his travel ban and most of its other sanctions on Belarus in 2016, following the release of political prisoners and a presidential election which, while far from free and fair, was not marred by violence against opponents of the former collective farm boss.

The West has continued to engage with Mr Lukashenko (65) in a bid to loosen his ties with Russian president Vladimir Putin, and in September the US and Belarus agreed to send ambassadors to each other’s capitals after an 11-year hiatus.

In talks on Tuesday with Austrian president Alexander Van der Bellen and other senior Austrian politicians, Mr Lukashenko is likely to face questions about how quickly and deeply Belarus intends to integrate with Russia in their union state.

Mr Lukashenko, who has ruled Belarus since 1994, signed a deal with Russia in 1999 that envisaged the introduction of a common currency, legal system and shared foreign and defence policies between the former Soviet neighbours.

Implementation has been excruciatingly slow, however, and concerns in Belarus that Russia may seek to swallow up its smaller and poorer western neighbour intensified when it seized Crimea and fomented war in eastern Ukraine in 2014.

Russia’s Kommersant newspaper reported last weekend that Moscow and Minsk had agreed on 16 of 31 “road maps” for economic integration, and officials hoped to nail down the rest before December 8th, when Mr Lukashenko and Mr Putin could sign off on the arrangements 20 years after the original union state deal was sealed.

Both leaders have publicly dismissed talk of political unification, but rumours persist that some officials close to Mr Putin favour the possibility of him taking control of a new union state after 2024, when he is constitutionally barred from continuing as Russian president.

Belarus also relies on Moscow for energy and credit, and whenever Mr Lukashenko has had to choose whether to side with the Kremlin or the West during his 25 years in power, he has always chosen Russia and continued autocracy.

Mr Lukashenko’s critics do not expect any democratic breakthrough in Sunday’s parliamentary elections, and regard the two seats gained by opposition candidates in the 2016 vote as a token gesture to appease the EU.

Before Mr Lukashenko’s planned arrival in Vienna on Monday, Minsk’s ambassador to Austria Alena Kupchyna told Belarusian media that she hoped “a package of agreements worth some €250 million” would be signed during the visit.