At least 25 reported murdered in Mexico over weekend 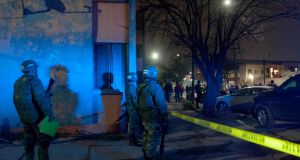 Soldiers patrol the area where nine people were killed in a house while watching a soccer game on TV in Monterrey, Mexico, early today. Photograph: Julio Cesar Aguilar/AFP/Getty Images

At least 25 people were murdered in Mexico this weekend, according to officials and local media, including nine men who were executed at a house party in a suburb of the wealthy northern industrial city of Monterrey.

Masked gunmen burst into a home in San Nicholas de los Garza as a group watched a local soccer team playing on television, according to state prosecutors. Seven were killed at the scene and two more died later at a hospital.

Mexico’s federal government called a news conference for later today to detail security plans after murders climbed to a record high of more than 25,000 last year.

Rival drug gangs have increasingly splintered into smaller, more bloodthirsty groups following more than a decade of a military-led campaign to battle the cartels.

Violence is a central issue ahead of the presidential election in July. Mexican President Enrique Pena Nieto’s ruling Institutional Revolutionary Party is trailing in third place in recent polls.

There were a wave of attacks in night spots late on Saturday and early today. A group of armed men killed three people in a bar in the resort city of Cancun, local media reported.

A Chilean tourist was killed when gunman opened fire at a restaurant in the Pacific beach resort of Acapulco, and two more were killed in a bar in the capital of Veracruz state on the Gulf of Mexico when two men opened fire on employees and a band.

Six more were killed in the border city of Ciudad Juarez, including a couple whose tortured bodies were found in a park.

Four more died in the border state of Tamaulipas, where at least 10 were killed during the week at outlaw road blockades and in shootouts, local media reported. – Reuters