US ties with Kurds in Syria create rift with Turkey 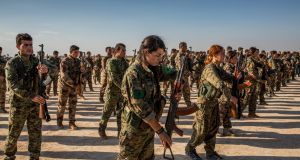 Members of the Syrian Democratic Forces. The militia is dominated by the Kurdish group known as YPG, which the United States regards as its most reliable partner in the area. Photograph: Ivor Prickett/the New York Times

They seek to sweep away borders and establish a stateless society. Their female fighters struggle and die beside male comrades. Their leftist, anti-Islamist image has attracted US and European volunteers.

The Kurdish fighters who are battling the Islamic State jihadis in Syria are regarded by the United States as its most reliable partners there. But to Turkey, a Nato ally of the US, these Kurds are terrorists.

The Kurdish group, known as the People’s Protection Units, or YPG, is now facing an escalating battle with Turkish forces in northwestern Syria, complicating US policy.

The group has deep ties to the Kurdistan Workers’ Party, also known as the PKK. Both Turkey and the US consider the PKK to be a terrorist organisation for its violent separatist movement inside Turkey. While YPG leaders play down their PKK ties, areas they control are festooned with photos of the imprisoned PKK leader Abdullah Ocalan, viewed by Turks the same way Americans viewed Osama bin Laden.

One thing is clear: the US, which has relied heavily on Kurdish fighters to push Islamic State out of northeastern Syria, has consistently understated the complexities of its alliance with the Kurds, a policy some analysts call wilful ignorance.

“Obviously the US chose to look the other way out of what it deemed to be the necessity of building an alliance to quickly capture territory from Daesh,” said Noah Bonsey, a Syria analyst with the International Crisis Group, using the Arabic acronym of the Islamic State.

“The US has sound reasons to continue to support the YPG, but doing so while the PKK maintains an active insurgency against its Nato ally is an unsustainable situation.”

The US military’s official partner in Syria is a militia known as the Syrian Democratic Forces, which includes Arab and Assyrian fighters but is dominated by the YPG. The Americans de-emphasise such details. But the co-operation with the YPG, including arming and training the fighters and providing them with air support, has put the US on a collision course with Turkey.

Just over a week ago Turkey launched a military operation against the Kurdish enclave of Afrin in northwestern Syria, and it is now threatening to expand the operation to the east, into areas where Kurdish forces are directly backed by the US military.

The US has sought to differentiate between the Kurds it supports and those in Afrin, whom it does not, a distinction the Kurds themselves do not recognise.

“They are not different parts at all, and they cannot be divided in any way, not politically, not economically, not militarily,” said Newaf Xelil, a Kurdish political analyst in Germany and a former spokesman for the party affiliated with the YPG. “For us it is all Kurdistan, and we are now defending Afrin with all we have.”

Last Wednesday US president Donald Trump urged his Turkish counterpart, Recep Tayyip Erdogan to use restraint and avoid any situation that could lead to clashes between the Turkish and US militaries. Disputing the White House’s description of the call, Turkish officials denied that Trump had made such a request.

YPG leaders say theirs is a home-grown movement that sprang up to defend civilians in the early days of Syria’s war and against offensives by Islamic State. That role, and the backing of the US, has transformed the group into the most prominent political and military force in northeastern Syria.

Formerly an impoverished and marginalised minority, Syria’s Kurds now administer substantial territory, where they are teaching Kurdish in schools and setting up local administrations.

Critics have accused them of displacing Arabs. US officials have long sought to minimise the YPG’s ties to the PKK, but Turkey is enraged that the US is giving military support to a group that idealises Ocalan, the sole inmate of an island prison in the Sea of Marmara.

Many YPG leaders speak openly of their history with the PKK, and Kurds from Iraq, Iran and Turkey have joined the movement in Syria.

Bonsey said there had been hope among the Americans that they could pull the YPG away from the PKK. But such a prospect appears unlikely – especially with the Kurds now uncertain that they have solid support from the US, which has sent mixed messages about how strongly it would back them against a Turkish onslaught.

The US ambivalence was clear last Wednesday in comments by Thomas Bossert, Trump’s homeland security and counter-terrorism adviser, at the World Economic Forum in Davos, Switzerland.

“I’m not in any way critical of the Turkish decision, but I’m just praying for their longer-term strategic patience,” Bossert told reporters. Asked if the Turks should withdraw, Bossert said: “I would prefer it if for now they would remove themselves from the capital of Afrin.”

The US effectively gave a green light to the current Turkish offensive against Afrin, urging restraint but emphasising that it does not work with the YPG there.

The enclave is in northwest Syria, not connected to a larger territory held by the Syrian Democratic Forces in the country’s northeast, where several small US military bases and several thousand US advisers are. But Erdogan has threatened to attack that larger area, beginning with the town of Manbij.

The Turks say the Americans promised that the Syrian Democratic Forces would withdraw from such majority-Arab areas after taking them from Islamic State, but it has not.

The ingredients for this clash have been brewing since Syrians rose up against the authoritarian rule of President Bashar al-Assad in 2011. Within a few years, the northeastern province of Hasaka, with a large Kurdish population as well as Arabs and Assyrians, was in effect ruling itself.

As it became the area’s dominant force, the YPG tried to implement its vision of a utopian society, inspired by Ocalan. Influenced by Murray Bookchin, an American anarchist, Ocalan has called for autonomous rule by local committees unbound by national borders. Proponents say they do not seek to break up Syria but are leading a long-term social revolution that will ensure gender and minority rights.

When Islamic State began sweeping across northeastern Syria, its first defeat was in the Kurdish border town of Kobani. The YPG, with help from US airstrikes, repulsed Islamic State fighters at great cost. After that, facing Turkish criticism, the US began calling its partner the Syrian Democratic Forces. There was a scramble to enlist Arabs and members of other ethnic groups.

The YPG remains the predominant part of the Syrian Democratic Forces and provides its most effective fighters. But the Kurds do have local allies. They have built local councils with representatives from various ethnic groups, each required to have a chairman and a chairwoman. While they are still largely overseen by the YPG, locals have begun to engage with them in significant ways.

Hassan Hassan, a Syrian analyst and author, said the Americans repeatedly had broken promises to Turkey about the alliance: They said the Syrian Democratic Forces would not cross the Euphrates River. It did. They said it would withdraw. It stayed.

The Americans also said the YPG would refrain from promoting PKK ideology outside Kurdish areas. Yet YPG fighters hoisted a huge poster of Ocalan in the centre of the city of Raqqa after wresting it from Islamic State last year, a huge embarrassment to the US.

Hassan said the local councils are vetted by the YPG and cannot be seen as fully democratic. But he said that in some areas Arab residents nonetheless had welcomed the Syrian Democratic Forces, particularly in the eastern province of Deir el-Zour, the area of Hassan’s family roots.

US officials have told the Kurds that the US will not fight Turkey for them. With a diminished need to fight Islamic State in Syria, Hassan said, US support for the Kurds could dwindle.

But Xelil, the Kurdish analyst, said the Americans would need the Kurds for their other objectives in Syria, like pushing back on Iranian influence. “We think that it is surely possible that the Americans will find real reasons to deepen their relationship with the Kurds in a strategic sense,” he said. – New York Times