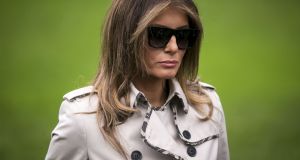 Melania has learned a few things from the master. The first lady will never be as brilliant at trolling as her husband. He is an idiot-savant who plays in the roiling ocean of Twitter as naturally as a blubbery-necked sea lion. Only Donald Trump, a Rat Pack relic who spurred the reckoning with his transgressions toward women, could send out a tweet taking credit for the women’s march.

But the Slovenian Sphinx has her moments. It started when she seemed to sartorially upbraid Trump for his Billy Bush vulgarities by wearing a pussy-bow blouse to the St Louis debate. Then, in a master stroke, she chose a first-lady project that could only be interpreted as a wicked rip on her husband: fighting vicious cyberbullies.

Last spring, Melania’s personal Twitter account liked a Gif of her own downcast face at the inaugural address with an accompanying crack: “Seems the only #Wall @realDonaldTrump’s built is the one between him and @FLOTUS.” And who can forget the crisp hand swat in Israel or her wish to spend Christmas on “a deserted island”?

Last weekend, on the anniversary of the inauguration, Melania instagrammed a throwback picture of herself in her powder-blue Jackie suit, not with her husband but with a hunky marine escort. She wore a delighted ear-to-ear smile, the kind she never seems to flash around the Donald. (It would have been even funnier, of course, if she had posted a photo of herself in front of some empty stands and a sparse crowd, but we’re talking more grounds for divorce there.)

Instead, while the kid from Queens was abroad trying to impress the soul-sucking global elites he got elected railing against, pathetically bragging that he had “a crowd like they’ve never had before in Davos”, Melania made a solo visit to the Holocaust Museum in Washington for Holocaust Remembrance Day.

This looked like a subtle reproach to Trump for his unspeakable defence of the “very fine people” among the neo-Nazis in Charlottesville, Virginia, and an allusion to the president’s statement last year on remembrance day, which somehow neglected to remember Jews or anti-Semitism. What a Stephen Miller special that was.

Seems the only #Wall @realDonaldTrump's built is the one between him and @FLOTUS #Melania #trump pic.twitter.com/XiNd2jiLUF

This has been a year filled with many wonderful moments. I’ve enjoyed the people I’ve been lucky enough to meet throughout our great country & the world!🇺🇸

Afterward, the always elusive first lady became even more elusive, slipping out of Washington, much to the surprise of the press. Suddenly, as Stormy Daniels began her media tour on Inside Edition and booked an appearance on the Jimmy Kimmel chatshow, Melania was making a stealthy landing in Florida on a US air force plane.

Many of the institutions that gave the United States its identity as a smart, brave, fair country seem corroded and immoral

How did we drop so far and so fast from class to crass? Partly, it was the Democrats’ preference for lecturing and entitlement over winning and wooing.

They passed over people who had better messages and more authentic personae who might have beaten Trump, like Bernie Sanders and Joe Biden, and gave the nomination to Hillary Clinton, a flawed feminist icon who was stunted in her ability to criticise her rival for his retrogressive treatment of women since she had enabled her husband in his retrogressive treatment of women.

The New York Times reported on Friday that Hillary protected a senior adviser on faith in her 2008 campaign who was accused of repeatedly sexually harassing a young woman aide.

Hillary ignored the advice of her campaign manager, Patti Solis Doyle, to fire the man, Burns Strider, and simply docked him several weeks’ pay and made him undergo counselling. The subordinate who complained was given a new job.

As the New York Times’s Susan Chira wrote, the episode was “a poignant reminder that placing women in positions of leadership does not ensure they will always act to protect other women”.

Everyone wondered if Melania’s rebellious vanishing act – combined with the simultaneous New York Times scoop that Trump had already tried to fire Robert Mueller but was blocked by the White House lawyer, Don McGahn – was the beginning of the “unravelling”, as one top Democrat put it. (Surely, the Trump unravelling began with his birth, like Damien in The Omen.)

“There’s an endgame in sight, though it may take longer,” Tim O’Brien, a Trump biographer, told me. “It’s like ancient Rome where they’re all turning on each other. McGahn is taking out the long knives to stick Trump in the back.

The White House is either ancient Rome falling or the Moscow cat circus, as the Trump biographer Michael D’Antonio calls it, or a blender with the top off, as one of my colleagues dubs it.

It’s a shattering moment for the country, when many of the institutions that gave the United States its identity as a smart, brave, generous, fair country – the presidency, Congress, sports, faith, Hollywood, big business – seem corroded and immoral. When we look in the mirror and try to figure out who we are now, elevating a corporate tax cut over our fundamental values is not going to cut it. – New York Times