Macedonia and Greece agree concessions in talks on name dispute

Skopje to rename controversial ‘Alexander the Great’ airport and highway

There is hope that fresh talks may help resolve a near 27-year dispute between Greece and FYR Macedonia, Greece claims use of the word "Macedonia" gives the country a territorial claim over the Greek region of the same name. 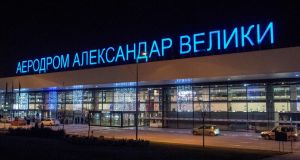 Alexander the Great Airport in Skopje. Macedonian PM Zoran Zaev said his country would rename the airport to show its “strong commitment” to ending a long-running row with Greece over the use of the name Macedonia. Photograph: Robert Atanasovski/AFP/Getty Images

Greece and Macedonia have announced a series of concessions as they seek to resolve a 27-year-old dispute over the ex-Yugoslav state’s name that is blocking its efforts to join the European Union and Nato.

Athens demands that the country change its name to remove any implied territorial claim on the Greek region of Macedonia and end any suggestion of a link between the mostly Slavic state and the legacy of Alexander the Great, a king of ancient Macedon.

The dispute festered for many years and was inflamed during a decade of nationalist rule in Macedonia, during which its main airport, a major highway and a huge statue in the centre of the capital, Skopje, were all dedicated to Alexander.

Since the nationalists were ousted from government last year, however, hopes have risen that a compromise solution could be found.

“We as prime ministers have political vision, courage and a responsibility to work, to overcome longstanding bilateral disputes,” Macedonian premier Zoran Zaev said on Wednesday alongside Greek counterpart Alexis Tsipras.

“Now it is high time to find a solution because it is crucial for our EU and Nato perspectives,” Mr Zaev said after more than two hours of talks on the sidelines of the World Economic Forum in Davos.

As a sign of his government’s commitment to a resolution, Mr Zaev said it would remove Alexander the Great’s name from the airport and highway; the latter would be renamed “Friendship”, he added.

After the countries’ first talks at prime-ministerial level for seven years, Mr Tsipras said his government would now seek to facilitate Macedonian membership of a club of Adriatic states and urge the Greek parliament to belatedly ratify the second phase of Skopje’s association agreement with the EU.

“We do not only want to solve the name issue but place our bilateral relations on firm foundations,” Mr Tsipras said.

“First we must fight irredentism in all its forms, with guarantees that will not allow any loophole that will allow similar challenges to emerge in the future.”

That appeared to be a nod to demands from Greek opposition parties that Macedonia remove any hint of a claim to Greek territory from its constitution before a deal is done.

Western powers back the new drive to solve the name dispute, and Nato wants Macedonia to become a member amid a struggle with Russia for influence in the Balkans.

The issue is still extremely sensitive in two countries where nationalism remains strong and opposition parties are wary of compromise, however.

Last Sunday, an estimated 300,000 people protested in Thessaloniki in northern Greece against any new name for the neighbouring country that included the disputed moniker, such as “Upper” or “New Macedonia”.