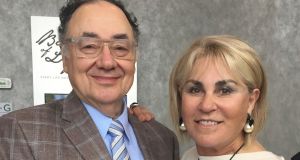 Barry and Honey Sherman: At the conclusion of a six-week investigation, police in Toronto confirmed what the couple’s friends and family have maintained all along – that their deaths were murder, not murder-suicide. Photograph: AP

The mysterious double deaths of a billionaire generic drug magnate and his philanthropist wife grew stranger still on Friday. Six weeks after the bodies of Barry and Honey Sherman were found hanging in the basement of their mansion, Toronto Police confirmed what the couple’s friends and family have maintained all along – that they died in a murder, not a murder-suicide.

Police found the couple’s bodies hanging from belts tied to a railing on the deck of their indoor pool on December 15th, two days after they had last been in contact with family and friends, the lead police investigator, Det Sgt Susan Gomes, told a packed news conference. But instead of holding to an earlier theory – leaked by unnamed police sources to news media outlets – casting the deaths as a murder-suicide, police now believe the deaths were a targeted, double homicide.

It was another bizarre turn in a dizzying case that has captured the country’s attention. The couple’s four children, furious at the police for leaking the murder-suicide theory, hired their own team to conduct a private investigation into their parents’ deaths – which experts expect will cost them hundreds of thousands of dollars. The couple was known for two contradictory things: making a fortune in the tough, litigious business of generic drugs, and giving a lot of it away to charity. Barry Sherman – whose name was Bernard but who was known as Barry – had been so successful building the country’s biggest Canadian-owned pharmaceutical company, Apotex, that Canadian Business magazine listed him as the country’s 15th-richest person, with a personal net worth of $4.77 billion.

He had a reputation as a brilliant scientist, a renowned workaholic and a shrewd and combative businessman who filed hundreds of lawsuits aimed at opening the market to his generic versions of drugs. He was also known for “at-risk launches” of generic drugs, flooding the market before litigation concluded. He was 75, but showed no signs of tiring.

His personal life had been dragged into court in a lawsuit filed in 2006 by his cousins, who claimed they were owed part of the company’s assets. An Ontario court threw out the case in September as “wishful thinking, and beyond fanciful”.

Honey Sherman, 70, was known as a bubbly and vivacious volunteer. Born in a displaced persons camp to two Holocaust victims, she was passionate about Holocaust education and spent much of her time volunteering and serving on numerous boards, including those of a university and a hospital. The couple had four children and gave millions to charity. But while they were well-known in political circles and in the country’s Jewish community, the Shermans were not household names across the country – until their dramatic deaths. More than 6,000 people, including prime minister Justin Trudeau, attended their funeral, which was live-streamed. Ontario premier Kathleen Wynne and Toronto mayor John Tory delivered eulogies.

In their often-raw public reflections, the couple’s family and friends described how loving the couple was and how, despite their billions, they remained down to earth and quirky. Barry Sherman had a penchant for correcting others’ grammar, and Honey Sherman loved cooking for large family gatherings while dressed in flip-flops and cow shirts. The shock, horror and mystery of their violent deaths hung over the ceremony. “Our parents never left anyone behind,” said the couple’s son Jonathan, wiping his face with a tissue. “They were taken from us.”

The police announcement on Friday gave the Shermans’ family and friends a sense of vindication. “This conclusion was expressed by the family from the outset and is consistent with the findings of the independent autopsy and investigation,” the family said in a statement. Fred Waks, a real estate developer and close friend of the Shermans who spoke at their funeral, said in an interview that “the police have finally come to the same place we’ve all been since the murders”. He added: “Anybody who knew Barry and Honey, it was not possible this was a murder-suicide.”

However, authorities have come no closer to understanding who killed the Shermans and why. The police still have no suspects, Ms Gomes said, despite six weeks of combing the couple’s grand home in the city’s north end, serving 20 search warrants, taking 127 witness statements and gathering around 2,000 hours of security videos from nearby homes and businesses. Investigators found no signs of forced entry to the couple’s home, Gomes said. While she confirmed news reports that the two were found in semi-seated positions and were dressed, she would not comment on a theory raised in a local news investigation that the private autopsy showed marks on both their wrists, indicating they were bound together at some point. – New York Times