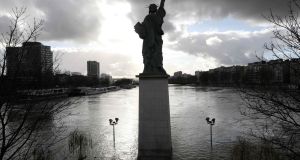 The flooded Ile aux Cygnes and banks of the river Seine with a model of the Statue of Liberty in Paris as seen on Friday. Photograph: AFP 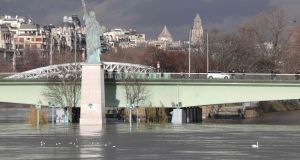 A picture taken on January 26, 2018, shows the flooded Ile aux Cygnes and banks of the river Seine with a model of the Statue of Liberty in Paris. Photograph: Getty

The levels of the River Seine in Paris rose further on Saturday and were set to hit a peak this weekend, according to official estimates, and French authorities were on standby for any major flooding risk.

The government’s “Vigicrues” flood monitoring body showed a slight increase overnight in the levels of the river in the capital, which could get close to peaks last seen in 2016.

The Seine’s overflowing waters have already engulfed riverside walkways in Paris and led the Louvre museum to close a basement display of Islamic art.

It has also resulted in the famous “Bateaux Mouches” tourist boats being shut down due to the high waters, swans swimming in places where there are usually pavements, and even rats being forced onto the streets of Paris due to the flood.

Flooding caused destruction in Paris in 1910 when the Seine rose by 8.65 metres. - Reuters