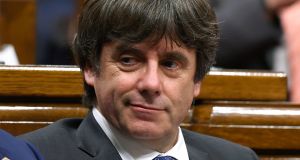 Josep Rull told Catalunya Radio on Sunday that Mr Puigdemont will do that in the next 24 hours to attend Tuesday’s investiture debate in Barcelona.

Spain’s Constitutional Court ruled on Saturday that Mr Puigdemont must be present at parliament to be chosen as the region’s chief.

It also said he must ask for a judge’s permission to do so.

Mr Puigdemont fled to Belgium after Catalonia’s parliament made an unsuccessful declaration of independence on October 27th in violation of Spain’s Constitution.

He is wanted in Spain on possible rebellion and sedition charges and is likely to be arrested if he returns from Brussels.

The court’s ruling quashed plans by Catalan separatist politicians to try to re-elect Mr Puigdemont without him being physically present, perhaps addressing the chamber via video.

The court also ruled the investiture of Mr Puigdemont would be suspended without the previous authorisation of a judge “even if he is physically in the chamber”.

While Mr Puigdemont and Mr Rull’s Together for Catalonia party insists he is the only candidate for the regional presidency, the other main pro-secession party is wavering.

Joan Tarda of the separatist Republican Left party said while they prefer to see Mr Puigdemont restored to power, their supreme goal is to have a pro-independence government in place by Wednesday to avoid a new election.

Contrary to the Spanish government’s wishes, separatist parties in Catalonia then regained a slim majority in the December election.

Polls consistently show that most Catalans want the right to decide the region’s future, but are evenly divided over splitting from Spain.–AP