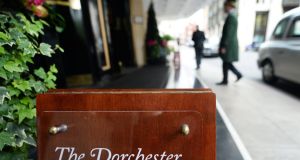 The entrance to the Dorchester Hotel in London, where the Presidents Club held its now infamous fundraising dinner last week. Photograph: Andy Rain/EPA

MPs are to ask police to investigate whether crimes were committed at the men-only Presidents Club dinner in London, attended by billionaires, politicians and businessmen, at which hired hostesses were allegedly groped and sexually harassed.

At least three MPs are writing to the Metropolitan police following reports that women believed to be sex workers were present at an after-party attended by some of the guests.

Calls for a police investigation came after an ITV interview with a hostess, who said she was “100 per cent sure” that sex workers were present later in the evening, as guests moved to another room in the exclusive Dorchester Hotel after dinner.

“We would be grateful if you can now confirm that the Metropolitan Police will investigate the criminal nature of allegations made against individuals involved,” they wrote.

“In particular, offences of harassment and pimping appear to have taken place. Women must be able to have confidence that perpetrators of sexual harassment, abuse and assault will be brought to book.

Jess Phillips, chair of the women’s parliamentary Labour Party, is also understood to have contacted the Metropolitan police, while fellow Labour MP Yvette Cooper called for multiple parallel investigations into potential law breaches. “Laws exist to prevent this kind of harassment and misogynistic abuse,” she said.

In an interview on ITV’s Good Morning programme, one woman who worked as a “hostess” at the Presidents Club dinner described the conditions endured by staff.

“The organisers were quite pushy and scary. If you were seen not talking to a man you would be pushed towards a man and say, ‘Look at that man over there, he looks lonely, go and talk to him, you’re being paid to do a job. A lot of hands were up skirts, I saw a lot of grabbing,” she said.

“There were also separate women who came into the after-party who were wearing red dresses. They were kissing men, [using] quite provocative body language and behaviour towards the men.”

The Presidents Club said on Wednesday it would close down and distribute its remaining funds in the light of the revelations in the Financial Times newspaper on Wednesday. The joint chair of the club, David Meller, was forced to stand down as a board member of the Department for Education as a result of his involvement.

The British government minister Nadhim Zahawi faced more pressure on Thursday over why he attended the charity dinner, as Theresa May voiced her disapproval of the event in her first broadcast interview on the scandal.

Mr Zahawi, the minister for children and families, was given a “dressing down” by the Tory chief whip, Julian Smith, on Wednesday night, after he admitted having attended the event.

On Thursday the British prime minister ducked questions about why Mr Zahawi attended the evented. Interviewed by the BBC at the World Economic Forum at Davos, Ms May said: “I understand that Nadhim Zahawi left early from that particular event. But when I read the report of that event that took place, frankly, I was appalled. I thought that sort of approach to women, that objectification of women was something that we were leaving behind.”

Asked again if it was right for a government minister to attend, she said: “I’m not happy with an event of that type taking place. What worries me is that it is not just about that event; it is what it says about this wider issue in society about attitudes to women.”

Ms May’s spokesman said that she would look into the issue of whether women working at the events were wrongly asked to sign non-disclosure agreements, or NDAs, requiring them to not report details of what took place inside – and left open the possibility of a wider review of their use.

The use of NDAs to prevent alleged victims from speaking has been a regular feature in sexual harassment stories that have emerged in recent months in the UK and US.

Questioned about details of what might change, or which department might lead on this, he said: “I’m not going to pre-empt the outcome of this. Issues have been raised and the PM will look into this.”

The spokesman also explained how a lunch with Boris Johnson came to be auctioned at the Presidents Club event, saying it was initially donated as a prize for another charity, set up by the former England cricketer Ian Botham, but that it was passed on without Mr Johnson knowing.

Liam Botham, Ian Botham’s son, was among those listed as being invited to last week’s event.

Elsewhere, Maria Miller, Tory chair of the Commons select committee for women and equalities, put more pressure on Mr Zahawi, also saying that he should have refused the invitation.

Speaking to ITV’s Good Morning Britain, she said: “No government minister should be going to an event where women are only there as the entertainment. That’s not acceptable. There are questions about why Nadhim had accepted this invitation.”

Mr Zahawi has declined requests for interviews but writing on Twitter he condemned the behaviour at the event, and claimesaid he left at 9.35pm after feeling “uncomfortable”.

The Labour MP Jess Phillips, who raised an urgent question in the Commons on Wednesday about the event, said Mr Zahawi should have expressed concerns at the time.

Margot James, the minister for digital and creative industries, who criticised the dinner as an event for “slimeballs”, said she was satisfied with Mr Zahawi’s explanation of what had happened.

Speaking to BBC’s Newsnight programme, she said: “I’ve spoken to him. I wanted to get the facts. He went home very shortly after the hostesses were announced by the presenter and paraded around the room. That indicates to me that he was shocked by the events, didn’t like the culture, the atmosphere, and left.”

A number of charities, including Great Ormond Street Hospital Children’s Charity, that have benefited from the £20 million raised by the Presidents Club over more than 30 years said they would refund previous donations in the wake of the allegations.

The Charity Commission said it was looking into the allegations “as a matter of urgency”.

The Dorchester Hotel said it was not aware of any claims following the event and an investigation had been launched.

A spokesman for the Artista agency, which recruited the hostesses, said: “I was not aware of any claims of sexual harassment, but the kind of behaviour alleged is completely unacceptable. I am checking with the staff and any complaints will be dealt with promptly and fairly.”

The culture secretary, Matt Hancock, told Sky News that if he had been invited he would not have attended. Asked about Mr Zahawi, he said: “I understand he went because it was a charity fundraiser and that he left early because he felt uncomfortable. I’m glad that the club has closed down, but it is part of a bigger change that we need to see to make sure we have genuine equal opportunities, and this sort of thing doesn’t happen.” – Guardian