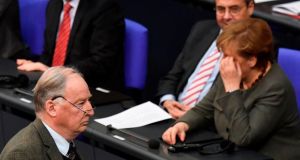 Four months on from the federal election, as Germany waits for a new government, the far-right Alternative für Deutschland (AfD) is settling into its role as opposition leader presumptive.

Bundestag tradition awards the largest opposition party the chair of the powerful budgetary committee and, in the new parliament, the largest party is the AfD – assuming successful coalition talks between Angela Merkel’s Christian Democratic alliance (CDU/CSU) and the Social Democratic Party (SPD).

The Bundestag budgetary committee oversees negotiations with the finance ministry on all financial matters and it made headlines in 2011 when, with Berlin as a bailout creditor, it was allowed to see details of the Irish budget before the Dáil did.

The AfD took almost 13 per cent in September’s poll – beating, at its second attempt, long-established parties the Greens, the Left Party and the liberal Free Democrats (FDP).

Founded by an economics professor in 2013 as a conservative-liberal anti-bailout protest party, the AfD repositioned itself during the 2015-2016 refugee crisis as a far-right populist party whose politicians warn on Twitter about “barbarian, Muslim gang-raping hordes” of refugees.

It maintains its opposition to bailouts and to the European Stability Mechanism bailout fund – and will now head the parliamentary committee controlling Germany’s contributions to the Greek loan package and the ESM’s likely transformation into a European Monetary Fund.

The AfD has appointed as budgetary committee chief Peter Böhringer, a businessman who opposes bailouts to indebted countries and currencies not backed by gold.

“I have great respect for this task,” he said in a statement.

On his website, Böhringer lists his political priorities as “Germany’s immediate exit from the illegal euro transfer union” and an “immediate end to the mass, illegal and existentially-threatening Islamist ‘immigration’ to Europe”.

The AfD politician insisted that in his new role he would “not be a political eunuch”.

That was an apparent nod to how the last parliament’s committee continued to support the European Union policy of the Merkel administration despite the chair being hard left politician Gesine Lötzsch.

She and other opposition committee members were no match for the huge grand coalition majority of CDU/CSU and SPD – a challenge Böhringer will face in his new role.

This week, Lötzsch said her successor as committee chair would not be a suitable representative for outreach work to embassies, international organisations and visiting parliamentary delegations.

She was, no doubt, referring to leaked emails from Böhringer, a 48-year-old consultant and economist, that complained of “criminal, Koran-enslaved Muslims”.

Another dismissed Merkel as a “whore” and likened a party conference of her CDU to a notorious wartime rally by Nazi propaganda minister Joseph Goebbels, proclaiming “total war” to a cheering audience.

Asked by Germany’s ARD public broadcaster about these leaked emails, Böhringer said he remembered “their contents, partly” – though declined to confirm he wrote them.

Germany’s mainstream parties may have conceded the budgetary committee, but they are battling the far-right party on other fronts. They have blocked, in several rounds of voting, the appointment of AfD politician Alfred Glaser as Bundestag deputy speaker after he suggested Muslims be excluded from constitutional protection of religious freedom.

Based on its share of the vote, the AfD is entitled to two other chairs of the 23 Bundestag committees. It is here, not on the parliament floor or the corridors of the historic Reichstag building, where the vast majority of political work is carried out.

A campaign prevented the AfD taking the chair of the culture committee which oversees, among other things, press freedom and Holocaust remembrance. Other parties believed the AfD, given its attacks on the media and on Germany’s “guilt cult”, is an unsuitable chair of this committee.

The other parties have also blocked an AfD candidate from joining the nine-party parliamentary control committee which meets in a bugproof room and, among other tasks, controls the intelligence services.

As a result of this final snub, the AfD has declared “war” on political rivals it sees as inhibiting its parliamentary work. One leading party figure complained that his party could “nominate Mother Teresa or the Dalai Lama and they wouldn’t be elected” to powerful committees.

In the end, the AfD was given two further committee chairs: law/consumer affairs and tourism.