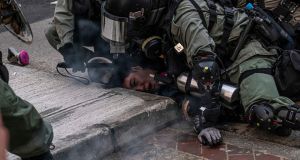 In one of the worst days of violence since protests began 17 weeks ago, chaos erupted in familiar yet ever-intensifying scenes.

The march was organised by online group Stand With Hong Kong, who called for solidarity rallies around the world this weekend to demonstrate against totalitarianism and denounce “China’s tyranny” on the eve of its 70th anniversary.

The group said that there were marches planned in more that 20 countries in support, including Ireland, and the Irish flag was one of two dozen carried by the lead Hong Kong protesters on Sunday as they chanted “Stand with Hong Kong, fight for freedom”.

With many marchers carrying “Chinazi” placards, depicting a version of the Chinese flag with yellow stars arranged in the shape of a swastika, tens of thousands set off towards the legislature. Photos of China’s president Xi Jinping were stuck on the street for people to stomp on if they so choose, and signs congratulating the People’s Republic of China on the 70th anniversary of its founding were torn down and burned.

The protesters ranged from the very young to the elderly, but at their core marched the “braves”, as they are known – the black-clad frontline activists who fully cover their faces, don gas masks, goggles and gloves, and are braced for battle.

Early in the unsanctioned rally on Sunday, dozens of the elite police squad the “Raptors” stormed down from a footbridge into the middle of the crowd firing teargas, wielding batons and pouncing on suspected ringleaders, leading to stampedes as people tried to scramble away from the chaos.

The hardcore protesters regrouped on both sides of the east-west thoroughfare and were soon lobbing bricks, bottles and petrol bombs at the police, who responded with several rounds of tear gas and pepper spray.

The frontline was supported by a human chain hundreds of metres long, along which was rapidly passed umbrellas, helmets, water and materials to make impromptu barricades. Wheelie bins full of bricks and bottles rumbled up through the parting crowds.

The frontline shifted at several points of the day as both sides made tactical retreats and disappeared into the city’s alleys, tunnels and overpasses and popped up in new positions. A group of protesters who finally made it to the legislature gates were driven back by water cannon, tear gas and charging police.

At one point a policeman in plainclothes fired a live round in the air after protesters had identified four undercover police officers who had infiltrated the crowd. The four officers were cornered and were being pelted with bricks when another undercover office took out a handgun and fired a bullet in the air to disperse the protesters.

On Saturday, similar scenes played out at a march to mark the fifth anniversary of the beginning of the pro-democracy Umbrella Movement. After the 79-day occupation of central Hong Kong ran out of steam in 2014, the retreating students hung a yellow banner on a footbridge saying “We will be back”. On Saturday, a huge yellow banner unfurled from the same footbridge read “We are back”.

The protests this year were sparked by a now-withdrawn extradition Bill, but demands were quickly widened to include a call for an independent inquiry into the police’s use of force, an amnesty for those arrested and meaningful elections.

Increased violence is expected on Tuesday when China will present a huge military parade and gala event in Beijing to celebrate the 70th anniversary since Mao Zedong formed the People’s Republic of China.

The Hong Kong protesters have called for that day to be marked as a “A Day of Grief” and have vowed to cast a pall over the Beijing affair by marching again in big numbers, despite another police ban.

The city’s chief executive Carrie Lam announced she will not be in Hong Kong on Tuesday, but instead will lead a delegation of 240 people to Beijing to join the parade and government celebrations.