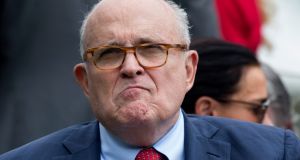 Attorney to US president Donald Trump, Rudy Giuliani attacked the anonymous whistleblower at the centre of the impeachment process and the Democrats leading it. Photograph: EPA

Donald Trump’s army of surrogates, led by his personal lawyer Rudy Giuliani, went into battle on Sunday as the beleaguered president sought to fight back against a rapidly intensifying impeachment inquiry.

Mr Giuliani, the former mayor of New York who is deeply implicated in Mr Trump’s efforts to solicit the help of the Ukraine government in his 2020 re-election bid, gave a rambling interview to ABC’s This Week that saw him frantically waving what he said were affidavits from Ukraine prosecutors.

The former New York mayor attacked the anonymous whistleblower at the centre of the impeachment process and the Democrats leading it.

Mr Giuliani denied that he had set out, at the president’s behest, to mine for dirt in Ukraine on Joe Biden, a frontrunner for the Democratic nomination.

“I’m not investigating Joe Biden,” he said, “I fell on Joe Biden in investigating how the Ukrainians were conspiring with the Hillary Clinton campaign to turn over dirty information.”

The impeachment inquiry launched by the Democrats is a few days old but it has begun to gather breakneck speed. Adam Schiff, the House intelligence committee chair, told ABC the party leadership was “bringing a real sense of urgency”.

Mr Schiff indicated that Michael Atkinson, the inspector general of the intelligence community who alerted Congress to an “urgent concern” raised in the whistleblower complaint, will be called back to testify in private. Mr Schiff and his fellow Democrats hope that will allow Mr Atkinson to hand over names of key White House witnesses.

Two diplomats are also likely to be called to testify this week: Kurt Volker, the special envoy to Ukraine who resigned on Friday, and Marie Yovanovitch, who was abruptly pulled from her post as ambassador in Kyiv last May in what was widely seen as a political hit job.

At the core of the impeachment battle is Mr Trump’s push to coerce the Ukraine government to investigate conspiracy theories relating to top Democrats including Mr Biden, Ms Clinton and others. According to the nine-page complaint filed by the whistleblower, an unidentified member of the intelligence services, “the president of the United States is using the power of his office to solicit interference from a foreign country in the 2020 US election”.

Mr Trump is accused of seeking dirt that would show that Mr Biden acted corruptly in 2016 in his role as Barack Obama’s vice-president by pressuring Ukraine to fire its chief prosecutor. According to the Trump narrative, the prosecutor was targeted because he was carrying out a corruption investigation on a large Ukrainian company on whose board sat Mr Biden’s son Hunter.

In fact, Mr Biden was one of many European and western leaders who wanted the prosecutor gone because he was failing to tackle corruption. In May, then chief prosecutor Yuriy Lutsenko told Bloomberg no wrongdoing had been found by either Biden.

One of the most highly charged decisions facing Mr Schiff and Democratic leadership will be whether to call Mr Giuliani to testify, given his role as Mr Trump’s go-between to Ukraine. Asked by ABC if he would appear, Mr Giuliani said he would “consider” it, but only if Mr Schiff were removed.

“I wouldn’t co-operate with Adam Schiff,” the former mayor said. “I think Adam Schiff should be removed. If they remove Adam Schiff, if they put a neutral person who hasn’t prejudged the case?”

Mr Schiff said the decision on whether to call Mr Giuliani would be made “down the road”.

Mr Giuliani reserved his harshest words for the whistleblower and Mr Biden. On the “so-called whistleblower”, a denigrating description that has become a Trump staple, Mr Giuliani accused him of saying “five things that were totally false. I’m not saying he was false, he could have heard it wrong – that’s why it’s hearsay”.

The Trump circle is accusing the whistleblower of hearsay because he was not personally present for the July 25th phone call between Mr Trump and Ukrainian president Volodymyr Zelenskiy in which Mr Trump said the now notorious words: “I want you to do us a favour though.” In fact, the whistleblower’s complaint is not hearsay – it is a report following protocol that draws on eye-witness accounts by direct participants.

Regardless, the hearsay line was rolled out by other Trump surrogates. Jim Jordan, a pugnacious congressman from Ohio, said: “This individual had no first-hand knowledge, he heard something from somebody.”

In a feisty exchange on CNN’s State of the Union, host Jake Tapper said: “The president was pushing the president of Ukraine to investigate a political rival. I cannot believe that is okay with you.”

Mr Jordan replied: “It is not okay, but he didn’t do that.”

Stephen Miller, Mr Trump’s far-right senior adviser, attacked the whistleblower in the most colourful and patronising language of all. The complaint was a “little Nancy Drew novel”, he told Fox News Sunday, while the whistleblower was a member of the “deep state” - another Trump conspiracy theory.

“I know what the deep state looks like, I know the difference between a whistleblower and a deep state operative,” Mr Miller said.

In fact, the whistleblower’s complaint was found to “appear credible” by the inspector general, Mr Atkinson, who cannot so easily be disparaged as “deep state”, having been appointed by Mr Trump.

Before Mr Miller spoke, Fox News Sunday reported that Mr Giuliani “was not the only attorney trying to get damaging information on Joe Biden from Ukrainian officials”.

Citing an anonymous US official, the report said two more lawyers, Joe DiGenova and his wife Victoria Toensing, had worked with Mr Giuliani “off the books” on Ukraine, meaning only Mr Trump knows what they did.

Mr Trump appears to be losing the appeal to public opinion. A new CBS News poll found that 55 per cent of Americans approve of the decision to open an impeachment inquiry.

But the poll suggests Democrats still have work to do. Only 42 per cent said they thought Mr Trump deserved to be impeached, with 36 per cent saying he did not and 22 per cent undecided.

Democrats are also refining their arguments. Mr Schiff told ABC: “The president of the United States used the full weight of his office to try and coerce [Ukraine] to manufacture dirt on his opponent and interfere with our election.”

Cory Booker, a senator from New Jersey vying with Mr Biden for the presidential nomination, told CNN Mr Trump acted “less like the leader of the free world and more like a dictator or thug in using American power to pursue his own personal gain”.