Gasps inside supreme court at judgment that surprised many 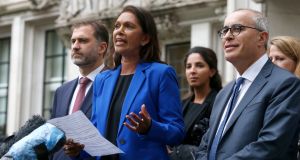 Businesswoman Gina Miller, who brought a legal challenge over the suspension of parliament, outside the supreme court on Tuesday after a ruling that prime minister Boris Johnson’s prorogation of parliament was unlawful. Photograph: Hollie Adams/Getty Images

Jeremy Corbyn has promised that when MPs return to Westminster on Wednesday, they will hold Boris Johnson to account for his unlawful attempt to suspend parliament. The Labour leader said the supreme court’s ruling showed that Britain was at “an extraordinary and precarious moment” in its history, and he called on Mr Johnson to resign.

“That would make him the shortest-serving British prime minister in history and rightly so. His is a born-to-rule government of the entitled who believe that the rules they set for everyone else don’t apply to them,” Mr Corbyn told his party’s conference in Brighton.

“He thought he could do whatever he liked just as he always does. He thinks he’s above us all. He is part of an elite that disdains democracy. He is not fit to be prime minister.”

Mr Corbyn cut the Labour conference short following the supreme court ruling, bringing his closing speech forward by a day, as speaker John Bercow announced that the House of Commons would sit on Wednesday. There will be no prime minister’s questions but Mr Bercow said MPs could call ministers to answer urgent questions and ministers would be able to make statements in the House.

There were gasps inside the supreme court as its president, Brenda Hale, read a summary of a judgment that surprised many at Westminster with the comprehensiveness of its rejection of the government’s arguments.

Lady Hale said Mr Johnson’s advice to Queen Elizabeth to prorogue parliament was unlawful because “it had the effect of frustrating or preventing the ability of parliament to carry out its constitutional functions without reasonable justification”. She said the five-week suspension of parliamentary democracy took place in exceptional circumstances because of the imminence of Britain’s scheduled departure from the EU on October 31st.

“Parliament, and in particular the House of Commons as the elected representatives of the people, has a right to a voice in how that change comes about. The effect upon the fundamentals of our democracy was extreme,” she said.

Mr Bercow immediately welcomed the court’s decision, which means that parliament remains in session and that the prorogation sought by Mr Johnson simply did not happen.

Some Conservatives on Tuesday were privately blaming the prime minister’s adviser Dominic Cummings for the decision to try to suspend parliament. Others suggested that attorney general Geoffrey Cox should take the blame for giving the government legal advice which proved to be wrong.

Mr Johnson, who has been attending the United Nations General Assembly in New York, said he disagreed with the supreme court’s decision and appeared to blame Brexit’s opponents.

“I don’t think this was the right decision. The prerogative of prorogation has been used for centuries without this kind of challenge,” he said.

“There are a lot of people who basically want to stop this country from coming out of the EU and we have a parliament that is unable to be prorogued and doesn’t want to have an election. I think it is time we took things forward.”

Mr Johnson said he still wanted to introduce a new legislative programme in a queen’s speech, which requires a prorogation of parliament. But the supreme court made clear that it would view any suspension lasting more than a few days with suspicion.

The government is expected to seek a parliamentary recess next week for the Conservative party conference, a step that requires a commons vote. During a recess, the House of Commons does not sit, but it is not suspended, and other parliamentary business such as committee hearings can continue.

Former Conservative prime minister John Major, who backed one of the cases that went to the supreme court, said on Tuesday that Mr Johnson should apologise to MPs for his actions.

“This was a case that should never have had to be considered, and it gave me no pleasure to be pitted against a government and prime minister of my own party,” he said.

“Parliament must now be recalled immediately to recommence its work, and to receive the prime minister’s unreserved apology. No prime minister must ever treat the monarch or parliament in this way again.”