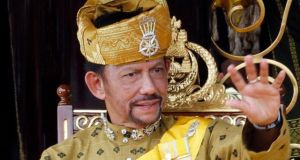 Brunei will deal a serious setback to human rights if it applies laws allowing death by stoning for adultery and gay sex, marking an end to a de facto moratorium on capital punishment, UN human rights chief Michelle Bachelet said on Monday.

“I appeal to the government to stop the entry into force of this draconian new penal code, which would mark a serious setback for human rights protections for the people of Brunei if implemented,” she said.

Brunei, a Muslim-majority former British protectorate with a population of about 400,000, plans to implement the Islamic Sharia laws from April 3rd.

The Brunei prime minister’s office said on Saturday that elements of the laws had been rolled out in phases since 2014 and would be fully implemented this week, aiming to “educate, respect and protect the legitimate rights of all individuals, society or nationality of any faiths and race”.

The change would allow the death penalty for rape, adultery, sodomy, extramarital sexual relations for Muslims, robbery, and insult or defamation of the Prophet Muhammad, as well as introducing public flogging as a punishment for abortion, and amputation for theft.

It would also be a criminal offence to expose Muslim children to the beliefs and practices of any other religion.

Brunei has a de facto moratorium on capital punishment, having carried out its last execution in 1957. According to international human rights laws, the death penalty should only be used, after a fair trial, to punish murder or intentional killing.

“In reality, no judiciary in the world can claim to be mistake-free, and evidence shows that the death penalty is disproportionately applied against people who are already vulnerable, with a high risk of miscarriages of justice,” Ms Bachelet said.

Brunei is ruled by Sultan Hassanal Bolkiah (72), the world’s second-longest reigning monarch, who ranks as one of the world’s wealthiest people.

The expected implementation of the strict Islamic laws has drawn widespread criticism. Politicians in Europe and the United States have attacked the plans and raised concerns with Brunei.

Last week former US vice-president Joe Biden called the plan “appalling and immoral” and said there was no excuse for such “hate and inhumanity”.

Oscar-winning actor George Clooney has called for a boycott of luxury hotels owned by the Brunei Investment Company, such as the Beverly Hills Hotel, the Dorchester in London and the Plaza Athenee in Paris. – Reuters