EU citizens most concerned about outer borders and migration

Poll of 46,000 people finds that many want tighter controls on outer EU borders 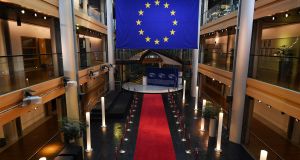 The protocol entrance of the European Parliament in Strasbourg. The survey of people in 14 countries showed concern about employment (20 per cent), cost of living (18 per cent) and healthcare (17 per cent). Photograph: Frederick Florin/AFP/Getty Images

With just such a border a possible outcome of a hard Brexit, the poll may concentrate minds and harden political resolve across the continent ahead of next month’s European elections.

Better policing of the EU outer wall is a major, uniting concern for 72 per cent of EU citizens in the survey for the European Council on Foreign Relations (ECFR).

The think tank asked polling agency YouGov to poll 46,000 people in 14 countries (excluding Ireland) in February and March who elect 80 per cent of MEPs. The survey shows that migration is uppermost in people’s minds, with one in four EU citizens (23 per cent) concerned it has had a negative effect on safety (57 per cent), national identity (40 per cent) and salaries (39 per cent).

Sweden, Austria, Denmark and Germany – on the front line of the refugee crisis in 2015-2016 – are most concerned about immigration. In Romania, where one-fifth of working age citizens now live abroad, 55 per cent of respondents expressed concerns about ongoing emigration. Similar concerns were expressed in the Czech Republic (48 per cent), Spain (34 per cent) and Italy (32 per cent).

Youth unemployment remains a primary concern for people in these countries: in Greece, 39 per cent of young people are jobless; in Italy and Spain, the rate is 33 per cent.

ECFR senior fellow Susi Dennison said the survey showed no direct preoccupation with Brexit, but the UK’s departure could be seen lingering behind other concerns.

“The general message that you can see in this data regarding migration is that people are worried about this idea of control and illegal migration,” she said. *“But more in questions about the actual impact on a personal, national level impact on jobs and wages, access to public welfare, culture, crime and security, one sees a preoccupation with integration and adapting to change.”

This unifying concern is visible across the continent – from the Netherlands and Germany right through to Hungary and Poland – with concern about employment (20 per cent), cost of living (18 per cent) and healthcare (17 per cent).

Presented with a list of worries, radical Islam was of most concern to more than one-fifth of respondents (22 per cent). The Dutch are most worried by this (34 per cent), followed by the Belgians and French (24 per cent).

Just as interesting, said Ms Dennison, was a lack of appetite for anyone to follow the UK out the door.

“In 2016 anti-EU parties were campaigning to take their countries out but now they are about making a European of sovereign nations and not leaving,” she said.

The ECFR paper describes the Irexit “Freedom to Prosper” movement as a “fringe initiative whose chances of success are close to zero”.