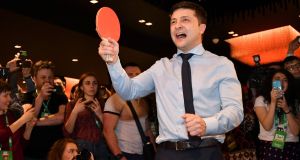 Ukrainian comic actor and presidential candidate Volodymyr Zelenskiy plays table tennis with a journalist ahead of the provisional results of the first-round vote in the election, in Kiev. Photograph: Genya Savilov/AFP/Getty Images

Ukrainian president Petro Poroshenko has pledged to put up a fierce fight to retain power, as results from the first round of presidential elections showed him trailing far behind comedian Volodymyr Zelenskiy three weeks before a run-off.

With 88 per cent of ballots counted from Sunday’s first-round vote, Mr Zelenskiy had 30.3 per cent, with Mr Poroshenko on 16 per cent and former prime minister Yulia Tymoshenko on 13.3 per cent. The top two from a field of 39 candidates will compete in an April 21st decider.

Mr Poroshenko went on the attack on Monday, accusing his rival of being a “puppet” of Ihor Kolomoisky, the oligarch who owns the channel that broadcasts Zelenskiy’s shows, and suggesting that victory for the inexperienced entertainer would be a win for Russia, which has waged an undeclared war against Ukraine since 2014.

“Why are the Kremlin, its agents and fugitive oligarchs raging so wildly about this year’s elections? It is fated that I will face a puppet of Kolomoisky in the second round,” Mr Poroshenko wrote on Facebook on Monday morning.

On Sunday night, Mr Poroshenko appealed directly to younger voters who are drawn to Mr Zelenskiy and his promise to shake up politics and end corruption.

Mr Poroshenko (53) said he shared their desire for faster and deeper reforms and urged them to give him another chance, while warning that Mr Zelenskiy (41) would be no match for Russian president Vladimir Putin.

“He [Putin] dreams of a soft, gentle, tolerant, giggling, inexperienced and weak, ideologically amorphous and politically uncertain president of Ukraine. Are we going to give him this chance?” he asked.

“Friends, this is not a joke, because afterwards we won’t be laughing.”

In a nation with little trust in politicians, Mr Zelenskiy has eschewed debates, long speeches and other traditional features of a campaign, in favour of social media posts, touring with his comedy troupe, and appearing on television as a teacher who unexpectedly becomes president in his popular show Servant of the People.

He is now under pressure to reveal more detailed plans, however. He has promised to name a team of experts who would guide his reforms; in the flush of victory on Sunday, he also said he was willing to face Mr Poroshenko in a debate.

Mr Zelenskiy denies being beholden to Mr Kolomoisky and insists he shares Mr Poroshenko’s desire for Ukraine to integrate with the West, peacefully regain Crimea from Russian control and end a war with Moscow-led militiamen that has claimed 13,000 lives.

When asked on Sunday night what he would say to Mr Putin if he met him as president, Mr Zelenskiy said: “Well, finally you returned our territories. How much are you going to compensate us for seizing [them]?”