Semi-naked climate change protesters cause a stir in Brexit debate 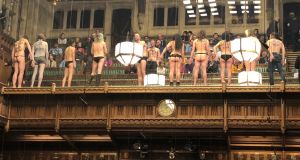 The Extinction Rebellion protest in the public gallery of the House of Commons on Monday. Photograph: James Heappey/PA Wire.

A group of semi-naked climate change protesters created a stir in Britain’s parliament on Monday, pressing their bottoms against a glass panel overlooking the chamber where MPs struggled to concentrate on a Brexit debate.

As MPs started yet another day of lengthy debate on how or even whether the country should leave the European Union, 12 protesters stripped to their underpants to show slogans painted on their backs, including: “Climate justice now.”

Several MPs could not stop themselves from looking up towards the public gallery, some giggling as Labour MP Peter Kyle tried to defend his bid for force the government to stage a confirmatory vote on its Brexit deal by pointing out what he called the “naked truth”.

Some protestors appeared to have glued themselves to the glass, while at least two were dressed up as elephants.

On their bodies were written the words “Climate justice act now” and “eco collapse”.

Savannah, an English literature student from Ladbroke Grove in London, was one of the naked protesters.

She said: “A bunch of people glued themselves to the window in the public gallery.

“Everyone stripped and two people were elephants and had climate crisis written on them.

“We were pointing at them as the elephants in the room of the Brexit debate.”

Conservative MP James Heappy tweeted “Parliament just got a little bit more nuts”, with a photograph from the chamber looking to the public gallery where the protestors were.

Extinction Rebellion, which describes itself as a non-violent direct action and civil disobedience group, claimed responsibility for the protest.

Police carried protesters out of the gallery after they appeared to refuse to leave voluntarily. Twelve protestors were arrested on suspicion of outraging public decency.