Donald Trump threatens to cut off aid payments to Palestinians 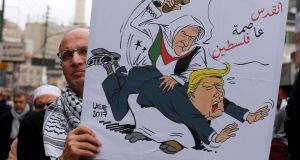 A man holds a placard reading “Jerusalem is the capital of Palestine” during a protest against US president Donald Trump’s recognition of Jerusalem as Israel’s capital. Photograph: Muhammad Hamed/Reuters.s

US president Donald Trump weighed in Tuesday on the stalled Middle East peace process, saying that the Palestinian Authority was taking “hundreds of millions of dollars” in assistance from the US while showing no “appreciation or respect”.

Mr Trump’s blunt comments represented a tougher tone toward the Palestinians than he has generally taken, suggesting that he is moving toward pressuring them to come to the table by threatening punishment rather than enticing them with promises of a deal that would benefit them.

He also chided the Palestinians for not trying to strike a peace agreement with Israel.

Last month, Mr Trump formally declared Jerusalem as the capital of Israel and said that he still supported a two-state solution between Israel and the Palestinians. The move won international condemnaton and prompted protests among Palestinians and other Muslims, who consider Jerusalem a holy city.

“With the Palestinians no longer willing to talk peace, why should we make any of these massive future payments to them?” Mr Trump said in Twitter messages on Tuesday.

It's not only Pakistan that we pay billions of dollars to for nothing, but also many other countries, and others. As an example, we pay the Palestinians HUNDRED OF MILLIONS OF DOLLARS a year and get no appreciation or respect. They don’t even want to negotiate a long overdue...

...peace treaty with Israel. We have taken Jerusalem, the toughest part of the negotiation, off the table, but Israel, for that, would have had to pay more. But with the Palestinians no longer willing to talk peace, why should we make any of these massive future payments to them?

In threatening to cut off aid to the Palestinians, he seemed to suggest that the US had invested that money for future consideration at peace talks.

Past administrations viewed aid to the Palestinians - more than $5 billion since the mid-1990s - as a way to keep the volatile situation from blowing up further, as it has in the past during two intifadas, or violent uprisings.

For all their tension, the Palestinians and Israelis cooperate on security to an extent, and the Palestinian president, Mahmoud Abbas, could curtail that in response to an aid cutoff, as he has periodically threatened to do. Such a move could complicate Israel’s ability to combat terrorism.

Experts on the region have long expressed concern that allowing economic and social conditions in the West Bank to worsen by cutting off aid would encourage violence.

In saying that he has “taken Jerusalem, the toughest part of the negotiation, off the table,” Mr Trump has made it harder, not easier, for the Palestinians to bargain. To them, he seems to have pre-emptively ruled out one of their most important conditions for a final peace deal before negotiations even begin, that East Jerusalem would be their capital alongside the Israeli capital in West Jerusalem.

Until recently, even many Israeli officials assumed that a permanent resolution of the conflict would involve some sort of compromise on Jerusalem. Palestinian leaders fear a popular backlash if they agreed to talks in which Jerusalem was no longer even an issue for discussion.

“It’s more frustration, it seems to me, than any effective policy with a clear goal, and like so many of his foreign policy decisions, it is driven by domestic politics,” said Aaron David Miller, a scholar at the Woodrow Wilson International Centre in Washington. “Beating up on the UN or defunding the Palestinians played extremely well with his base constituency. He loses very little.” - New York Times