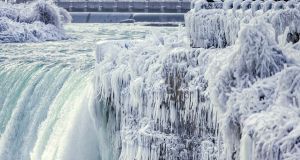 Visitors take photographs at the brink of the Horseshoe Falls in Niagara Falls, Ontario, as cold weather continues through much of the province. Photograph: Aaron Lynett/The Canadian Press via AP

Bone-chilling cold has gripped the middle of the US, putting paid to some new year’s celebrations and leading to at least two deaths attributed to exposure to the elements.

The National Weather Service issued wind chill advisories covering a vast area from south Texas all the way to Canada and from Montana and Wyoming in the west through to New England to the northern tip of Maine.

Dangerously low temperatures enveloped eight states including parts of Kansas, Missouri, Illinois and Nebraska, along with nearly all of Iowa, Minnesota, South Dakota and North Dakota.

The weather service said a temperature of minus 26 degrees was recorded in Omaha before midnight on Sunday, breaking a record low dating back to 1884. The reading did not include the wind chill effect.

It was even colder in Des Moines at minus 29 degrees, with wind chill dipping to minus 35.

Des Moines officials have closed a city centre outdoor ice-skating plaza and said it will not reopen until the city emerges from sub-zero temperatures.

The wind chill dipped to minus 38 degrees in Duluth, Minnesota, a city known for its bitter cold winters.

On Sunday, Heritage Canada cancelled a New Year’s Eve concert planned for Ottawa because of an extreme cold weather warning. The forecast low for the nation’s capital on Sunday was minus 29 degrees.

An Indianapolis woman was in critical condition after she became confused in the snow and ice and turned her vehicle in the wrong direction, driving 150ft on a retention pond before her vehicle fell through the ice, according to local television.

She managed to make an emergency call but the phone went dead when the ice cracked.

They included a man in his 50s found on the ground in an alley and a 34-year-old man. – AP/Guardian