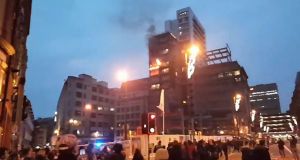 Image taken from video shared by Alex Huzar of a fire at a 12-storey building in Manchester. Photograph: Photo credit should read: Alex Huzar/PA Wire

A large fire has broken out in an 12 storey residential block in Manchester’s Northern Quarter, and police have advised members of the public to avoid the area.

Onlookers said the fire appeared to be have been extinguished, but dramatic footage of the blaze engulfing flats has been posted on social media.

Police and firefighters have cleared a large area around the residential building, with 12 fire engines on the scene. Authorities advised those nearby to keep windows and doors shut.

Greater Manchester fire and rescue service tweeted: “We’re currently tackling a fire on the 9th floor of a 12 storey building on Joiner Street in Manchester’s Northern Quarter. Please avoid the area if possible and keep windows and doors shut if you live nearby.”

Aman Thakar, visiting Manchester, said that the fire appeared to have been quickly brought under control.

“We could see firemen working with torches through the windows of some of the floors where there was fire, so hopefully it’s being controlled,” he said.

“We could see lights on the floors below where the fire was, but nothing in the floors above, so hopefully that also means that non one was trapped up there.”

“It looks like a residential block. Everyone watching below was quite calm although we heard ‘London’ being mentioned a few times in the context of people saying: ‘at least it’s not as bad’.” – Guardian