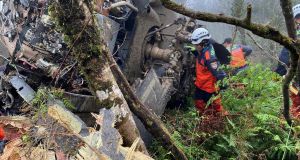 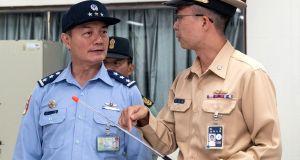 Taiwan’s top military chief was among eight people killed on Thursday after the Black Hawk helicopter that was carrying them crashed in a mountainous region near Taipei, the defence ministry said.

Thirteen people were on board the UH-60M Black Hawk helicopter, with five surviving the crash. Gen Shen Yi-ming, the chief of general staff of Taiwan’s armed forces, was confirmed dead, as were two major generals, a lieutenant colonel, two senior master sergeants, a captain and a major.

Lieut Gen Hsiung Hou-chi told a press briefing that the ministry had set up a taskforce to investigate the incident.

“We are investigating whether the cause was environmental or mechanical,” he said.

The helicopter left Songshan airport in Taipei shortly before 8am to fly to Yilan County in northeastern Taiwan for an inspection. The last contact with the helicopter was at 8.07am when the pilot reported on weather conditions.

It had been raining heavily in the area at the time of the crash, officials said. Rescuers later struggled to reach the wreckage in the mountainous and forested terrain.

The incident comes just a week ahead of presidential and parliamentary elections. President Tsai Ing-wen, who is seeking a second term, ordered flags to fly at half-mast at all military institutions and suspended her campaign activities for three days to deal with the incident in her capacity as commander-in-chief of the armed forces.

“Today is a very sorrowful day,” she said. “The national army has several excellent generals and colleagues who lost their lives in the accident.” She described Gen Shen as “an excellent, capable and beloved chief”.

Her priority now was to ensure the island maintained stable defence operations following the sudden loss of so many military leaders, she said.

“The most important thing is that during this period we should ensure the stability of the national army and maintain sound national defence work,” she said.

The helicopter in the crash was one of 60 Black Hawks bought from the US under the Obama administration in 2010. Local media reports said it was delivered in July and had flown for only 376 hours.

The incident was the latest in a series of military aviation accidents in Taiwan. Another Black Hawk helicopter crashed off an outlying island in 2018, killing six, and in the same year the crash of an F-16 jet resulted in the death of its pilot.

Beijing has ramped up pressure on the self-ruled island since Ms Tsai took office in 2016, increasing military manoeuvres in the region and cutting off official communications. China considers the island to be part of its territory and has said it will use force if necessary to take it back.

Cross-strait relations are the dominant issue in the upcoming January 11th elections, and the pro-independence Ms Tsai is polling ahead of the Kuomintang challenger Han Kuo-yu, the Kaohsiung city mayor who advocates warmer relations with Beijing.