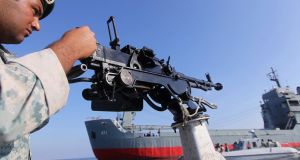 An Iranian soldier during previous military exercises in the Strait of Hormuz. Photograph: Ali Mohammadi/AFP via Getty Images

Russia, China and Iran launched their first joint naval exercises in the Gulf of Oman and the Indian Ocean on Friday, in the latest sign of co-operation between the two US rivals and the Islamic republic, struggling under the strain of American sanctions.

The Gulf of Oman has become a flash point amid mounting international tensions between the US and Iran after Tehran shot down an American surveillance drone in June and seized a British-flagged oil tanker for allegedly violating its territorial waters. In total, at least six oil vessels were attacked in the area in May and June, assaults which the US blamed on Iran.

The Islamic republic, which denies sabotaging oil tankers, has repeatedly opposed the presence of foreign forces in the Gulf of Oman and threatened to make oil shipments insecure for all countries if its own crude sales are blocked by the US or regional states.

“The most important achievement of these drills ... is this message that the Islamic republic of Iran cannot be isolated,” vice-admiral Gholamreza Tahani, a deputy naval commander, told Iranian media. “These exercises show that relations between Iran, Russia and China have reached a new high level while this trend will continue in the coming years.”

Jonathan Eyal, associate director at the Royal United Services Institute, said the initiative had been choreographed by the three countries to send a message that US influence in the region is waning.

“This is a carefully calculated exercise in which all three participants are winners: Iran gets to claim it is a regional power, Russia demonstrates its role as the key actor in the Middle East, and China can show it is a global naval power,” Mr Eyal said. “The strategic message is that these are the countries shaping events in the Middle East.”

The drills, which will include tactical exercises such as rescuing frigates under attack, began in the port city of Chabahar in southeastern Iran and are due to continue in northern parts of the Indian Ocean.

Russia said the joint exercises were legal and focused on ensuring regional stability. “We are dealing with the issues of maintaining stability in the region, security and the fight against terrorism,” said Maria Zakharova, a spokeswoman for the Russian foreign ministry. “This co-operation and interaction is built on both a bilateral and multilateral basis, but exclusively on a legal basis.”

“It is not necessarily connected with the regional situation,” a defence ministry spokesperson added.

The drills come after a US-led naval coalition, including Bahrain, Saudi Arabia and the United Arab Emirates, launched operations in the Gulf of Oman in November to guarantee the safe supply of oil from the region. The UK and Australia have also agreed to send warships.

The Russian, Chinese and Iranian exercises are being conducted near the Strait of Hormuz, one of two choke points for tankers travelling between Iran and China. China imports about half of its annual crude oil requirement, and last year Iran was its seventh largest supplier.

Iran’s oil exports have plummeted since US president Donald Trump withdrew the US from an international deal to curb Iran’s nuclear programme and imposed sanctions on the country in May 2018. Crude sales before sanctions were introduced stood at 2.8 million barrels but have now fallen to less than 500,000 bpd (barrels per day). China is thought to have remained Iran’s top customer.

Moscow has condemned the US decision to withdraw from the nuclear deal and sought to find alternative trade and finance mechanisms to offset the impact of the sanctions.

After the joint exercises conclude, Iran’s foreign minister Mohammad Zarif is due to visit Moscow on Monday for further discussions with his Russian counterpart, Sergei Lavrov, on “the development of ties in the trade, economic, humanitarian and other practical fields”, said Russia’s foreign ministry. – Copyright The Financial Times Limited 2019

1 Coronavirus: Ireland should ‘look seriously’ at closing borders to keep new infections out
2 'The last time I saw her was when she was being put into the ambulance'
3 People should carry ‘evidence’ of travel reasons if exceeding 2km limit
4 Coronavirus: Medical staff may face ‘emotional distress’ over patient prioritisation
5 Engineers gather to produce ‘battlefield’ ventilator in war on Covid-19
Real news has value SUBSCRIBE