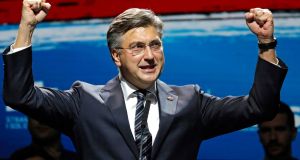 Croatian prime minister Andrej Plenkovic has outlined a “very intensive and dynamic” start to the country’s presidency of the EU. Photograph: Antonio Bat/EPA

Croatia will take over the presidency of the European Union for the first time on January 1st, for a six-month stint that is likely to be dominated by Brexit and potentially fractious talks on the bloc’s 2021-2027 budget.

An EU member since 2013, Croatia will also seek to boost accession prospects for other Balkan nations while focusing attention on a range of issues that affect the region, including illegal migration and emigration to richer EU states such as Ireland.

While the presidency is largely an organisational role, Croatia will hope to avoid the embarrassing discord between government and head of state that dogged Romania’s first spell in the post this year, and which could also threaten Zagreb’s term if an opposition candidate wins a January 5th presidential run-off.

Croatia’s relations with its neighbours will also be in the spotlight, as it seeks to resolve a territorial dispute with Slovenia that is hampering its bid to join the EU’s “passport-free” Schengen zone, and after a Zagreb court on Monday convicted a top Hungarian energy executive of bribing a former Croatian prime minister.

His government says “a strong Europe in a world of challenges” will be the motto for a Croatian presidency that envisages an EU which “develops, connects and protects” and is “influential” in global affairs.

In reality, all other topics are likely to be overshadowed by Britain’s scheduled departure from the bloc and the start of talks on future relations between London and Brussels, and negotiations on the EU’s new seven-year budget.

Croatia is part of the so-called Friends of Cohesion group of eastern and southern EU members, which strongly oppose proposals from wealthier nations to cut “cohesion funds” to poorer states and tighten controls on how they are spent.

The budget debate could inflame tension between the populists running Hungary, Poland and the Czech Republic – which are close to Croatia’s conservative government on a range of issues – and top officials in Berlin, Paris and Brussels.

When it hosts a summit of EU and Balkan leaders in May, Croatia will aim to reinvigorate the accession hopes of North Macedonia and Albania, after France led opposition to the launch of membership talks with both nations in October.

Croatia’s ruling Christian Democratic Union will hope the domestic political scene is not shaken early next month by defeat for its ally, president Kolinda Grabar-Kitarovic, in an election run-off with centre-left challenger Zoran Milanovic.

At the same time, Mr Plenkovic’s government will hope to avoid a row with Budapest over Zsolt Hernadi, the head of Hungary’s biggest energy company, MOL, who was found guilty on Monday of bribing former Croatian premier Ivo Sanader.

“There is an active European arrest warrant for Hernadi and Hungary should act accordingly,” said Ivan Turudic, the president of the Zagreb court.

Mr Sanader and Mr Hernadi deny any wrongdoing and are expected to appeal.

1 Ireland enjoys hottest day of the year for second time this week
2 Police officer ‘kicked in the face’ while clearing crowd from beach
3 Quarantine will cease within fortnight, Ryanair CEO claims
4 Irish tourists excluded from visiting Greece as country begins its tourism season
5 George Floyd death: Teenager dies in clashes as protests spread across US
Real news has value SUBSCRIBE