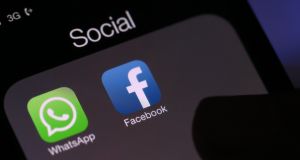 Rumours of children being kidnapped and killed, allegedly for their body parts, spread over Facebook and WhatsApp. Photograph: Chris Ratcliffe/Bloomberg

At least 16 people were arrested on Monday in India’s northeastern Assam state for their alleged involvement in the lynching of two men following rumours on social media that they were child kidnappers.

The arrests followed violent state-wide protests against the killings of Nilotpal Das (29) and Abijeet Nath (30) on Friday evening in Assam’s Karbi Anglong district, 180km east of the state capital, Dispur.

The two had gone to a picnic spot in the area to visit a waterfall and were attacked on their return by a mob who accused them of being child abductors.

Officials said the attack was prompted by rumours spread via telephone calls and WhatsApp messages that the two were fleeing in their black SUV after kidnapping a child from the area.

A video of the attack went viral over the weekend. In it one of the two victims is seen pleading for his life, telling his attackers that he was innocent.

“Don’t kill me ... please don’t beat me … please let me go,” were Das’s last words before he was beaten with bamboo sticks and hanged from a tree. His companion was killed in a similar manner.

According to local accounts, the people responsible for killing the two men not only filmed one of them begging for mercy, but also posted the videos on Facebook in addition to claiming responsibility for the murders.

“The horrific killings stemmed largely from ignorance and the hatred locals harbour against outsiders,” said Ipshita Baruah from Guwahati, near Dispur. Locals had used the allegation of child kidnapping to exert violence against strangers, she added.

The authorities in Assam said they were monitoring social media sites to counter those seeking to spread fake news with the aim of fostering panic.

State director general of police Kuladar Saikia said some of those associated with the lynching had been identified, but were in hiding. “We are looking for them,” he added.

Rumours of children being kidnapped and killed, allegedly for their body parts, spread over Facebook and WhatsApp, have recently gathered momentum across India resulting in at least six people being killed by vigilante mobs in as many weeks.

Three people were killed and nine others injured in mob violence in the southern neighbouring states of Andhra Pradesh and Telangana last month in what police claim to be a wave of social media-inspired lynchings.

Villagers in both states began nightly patrols following rumours on WhatsApp and other social media platforms that gangs of child kidnappers were roaming the region.

In some instances police said doctored video messages, depicting children being snatched from streets, had been circulated, resulting in local mobs beating up and killing people who looked unfamiliar or could not speak the local language or dialect.

Local reports of several such killings have also suggested that these were executed to “settle scores” by the victims’ business, social or even political rivals.

1 Irish tourists excluded from visiting Greece and Croatia
2 Taoiseach has confirmed schools will reopen at the end of August
3 Derek Chauvin charged with murder in connection with death of George Floyd
4 Private hospitals ‘takeover’ by State will not be extended past June
5 Covid-19: People should keep record of who they meet to help contact tracers
Real news has value SUBSCRIBE