Ethiopia to cede land at heart of bloody conflict with Eritrea 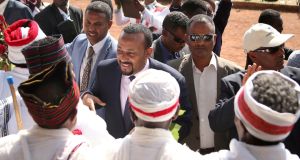 Ethiopia announced on Tuesday that it would implement a peace agreement ending a 1998-2000 war with Eritrea that requires it to cede disputed land it has occupied for almost two decades.

The executive committee of the ruling Ethiopian People’s Revolutionary Democratic Front also said after a day-long meeting that the government would sell off minority stakes in state-owned enterprises, including Ethio Telecom and Ethiopian Airlines, and that foreigners would be allowed to invest in the lucrative businesses.

The moves are part of a radical reform agenda initiated by Abiy Ahmed, who became Ethiopian prime minister in April, to open up the country after 26 years of authoritarian rule by a minority elite. He has also promised greater democracy in a nation where the EPRDF controls every seat in parliament.

In December 2000, Ethiopia and Eritrea signed an agreement in Algiers to end the two-year conflict triggered by competing claims for territory along the border. The fighting cost tens of thousands of lives.

But Addis Ababa refused to recognise the decision in 2002 of a boundary commission established under the agreement that gave the town of Badme, which was the flashpoint of the war, and surrounding territory to Eritrea.

Ethiopia has occupied the area ever since, insisting that relations should be normalised before any resolution of the boundary, and the countries have remained in a state of “no peace no war” ever since.

But, on Tuesday, Ethiopia said it would “fully implement” the Algiers accord and the decision of the boundary commission.

“Ethiopia has flouted an international peace agreement for 16 years and used its larger size and more sophisticated diplomatic clout to isolate Eritrea regionally and internationally,” he said. “But since Abiy Ahmed has come in he’s talked about wanting to mend ties and reach out to Eritrea.

“This is the first step. We now need to see them actually give up Badme.”

If Mr Abiy keeps his word and fully complies with the Algiers agreement, it could make life difficult for Isaias Afewerki, the dictator who has ruled Eritrea since the country won independence from Ethiopia in 1993.

“My instinct is that President Isaias will not want to respond positively because the grip that he has over his country is predicated on the fact that Eritrea faces a constant national security threat from Ethiopia,” Mr Soliman said. “If that threat were to go away then there would be no reason for some of the restrictions any longer.”

Eritrea is considered one of the most repressive societies in the world. There is compulsory lifetime national service, very few human rights and heavy punishment for anyone who challenges Mr Isaias.

A UN commission of inquiry recommended in 2016 that the state’s “persistent” abuses should be referred to the International Criminal Court.

The EPRDF said that the partial privatisation of Ethio Telecom, Ethiopian Airlines, Ethiopian Power, and the Maritime Transport and Logistics Corporation was to “improve on the achievement of fast economic growth and boost exports”.

No details were given on the size of the minority stakes that would be sold, to whom they would be offered or the amount of money the government hoped to raise.

Ethiopia is suffering a massive foreign exchange crisis, with its reserves thought to cover little more than a month of imports as it seeks to transform the economy through an ambitious debt-funded development strategy that involves massive infrastructure projects and building a dozen industrial parks. – Copyright The Financial Times Limited 2018