British model Chloe Ayling, 20, arrived back at her home in London on Sunday (August 6) after being held captive in Italy by a kidnapper threatening to auction her online unless a ransom of $300,000 was paid. 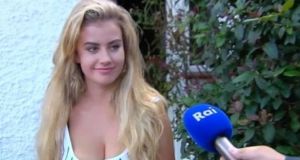 File photograph of Chloe Ayling speaking to reporters the weekend after her ordeal.

A British model has told how she feels vindicated after the man she accused of kidnapping her for ransom was convicted and jailed for nearly 17 years.

Lukasz Herba (30), was sentenced on Monday to 16 years and nine months’ imprisonment after an Italian court convicted him of kidnapping Chloe Ayling.

Ms Ayling (20), of Coulsdon, south London, said she was drugged and bundled into a suitcase after arriving at a Milan address for a modelling job.

But she was accused in court of being involved in a “publicity stunt” and had her motivations questioned in the media.

After the verdict, Ms Ayling told the Sun newspaper: “I am very pleased and relieved by the outcome of today’s hearing and feel that justice has been served and I can get closure on what has been a terrible time for me.

“I am desperate to put this ordeal behind me, move on with my life and forge a new path now that the world can see I was telling the truth.”

Adrian Sington, who represents Ms Ayling at talent management agency Kruger Cowne, also welcomed the conviction. “This has been an incredible burden on her shoulders for the last year in the face of media criticism of her motivation, and this is vindication – her story is true,” he said.

“And it means now she can get on with her life. It’s hard if you’re being painted in the press as a liar and now she’s able to say, ‘I know it’s a bizarre story but it’s a true one.”’

Ms Ayling was held in a farmhouse near Turin while a €300,000 ransom was demanded. She was released six days later, on July 17th, at the British consulate in Milan.

Herba, a Polish national, claimed during his Milan trial that she agreed to the scheme to boost her career. His brother, Michal Herba, was arrested in the Tividale area of Sandwell, West Midlands, in August and was ordered to be extradited to face trial in Italy. He denies any wrongdoing.

Italian police said the brothers were members of a group calling itself Black Death, which is active on the dark web and claims to sell women as sex slaves to buyers in the Middle East. – PA