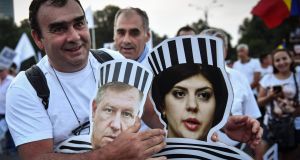 More than 150,000 Romanians have taken to the streets in rival rallies as tension grows over government efforts to oust the country’s chief anti-corruption prosecutor and introduce reforms that critics say would blunt the fight against graft.

The ruling Social Democrats (PSD) held a mass protest on Saturday against supposed “abuses” by a “shadow state”, which they accuse of using the methods of the communist-era secret police to wrongly prosecute top party officials.

The PSD’s main target is Laura Codruta Kovesi, the head of Romania’s anti-corruption agency (DNA), which has been praised by the European Union for investigating and successfully prosecuting powerful politicians and businessmen.

Senior PSD members have fallen foul of the agency, including party leader Liviu Dragnea, who is banned from high office due to a conviction for vote rigging and now faces separate allegations of abuse of power and fraud involving EU funds.

“It doesn’t even matter if you are guilty or not. It’s only important that the shadow state knows what you are talking about, what you think and want,” Mr Dragnea told some 150,000 people in central Bucharest on Saturday.

“The more they know, the more powerful and repressive they get, while we get more vulnerable. Anything you say they will use against you . . . Nobody is safe. Absolutely everyone can be targeted by a tip-off which could lead to a conviction.”

Top PSD and government officials have increasingly resorted to conspiracy theories to counter criticism that they are intent on watering down anti-corruption legislation to benefit themselves and their allies.

When hundreds of thousands of Romanians protested across the country last year against the government’s bid to decriminalise several graft offences, PSD officials claimed they were being paid by liberal philanthropist George Soros – bugbear of populist leaders everywhere from the US to Russia, Hungary and Poland.

Critics accused the PSD of using cynical tactics to boost numbers at its rally, by laying on buses and trains for people keen to visit Bucharest from the provinces and by using local officials to pressure state workers and pensioners to attend.

Romanian president Klaus Iohannis, a critic of the government, said that “in no normal society is a protest rally associated with those in power, who have all the instruments needed to solve problems”.

On Sunday evening, anti-government protesters gathered in Bucharest and other cities to support Ms Codruta Kovesi and demand an end to political interference in the judicial system; organisers expected thousands to attend.

The PSD received a major boost late last month, when Romania’s constitutional court ruled that Mr Iohannis did not have the right to reject a request from justice minister Tudorel Toader to fire Ms Codruta Kovesi for alleged abuse of office.

Mr Iohannis has backed the top prosecutor and said he will wait until he sees the court’s full justification for its ruling before making a decision on her future.

If he refuses to sack her, the government could try to impeach him, further deepening the divisions in Romanian politics and society.