Kiev accuses Budapest of stoking tension among its Hungarian minority 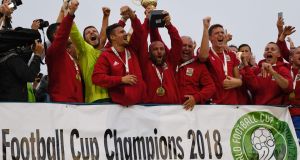 An ethnic Hungarian team’s surprise victory in an alternative football World Cup has become the latest irritant in tetchy relations between Ukraine and Hungary.

A team representing the Hungarian minority in the Zakarpattia area of western Ukraine – which they call Karpatalja – beat Northern Cyprus in London on Saturday to win a competition between 16 sides from regions around the world that are not recognised as independent states.

Karpatalja only entered the event – which is run by the Confederation of Independent Football Associations (Conifa) – when a team of ethnic Hungarians from Slovakia pulled out at the last minute.

As the Karpatalja squad and their ethnic kin in Hungary celebrated their win ahead of the start of the Fifa World Cup this week, however, Ukraine expressed irritation and suspicion over a victory that comes amid a sharp deterioration in relations between Budapest and Kiev.

“I really love football, but I’m not at all happy about the sporting ‘success’ of the team from Zakarpattia,” Ukrainian foreign minister Pavlo Klimkin wrote on Facebook.

“I think law-enforcement agencies should give the team a ‘friendly’ welcome back to their motherland and ask where they got their funding, who is backing the players and generally ask a lot of other questions.”

Hungary has vowed to use its EU and Nato membership to block co-operation between the organisations and Ukraine until Kiev scraps education reform that Budapest says discriminates against minorities by reducing the amount of teaching allowed in their languages.

In response, Ukrainian officials accuse Budapest of scaremongering over supposed threats to Hungarians in Zakarpattia, of fuelling tension in the region and of aiding Russia’s efforts to undermine Ukraine by wrongly accusing it of persecuting minorities and hampering its integration with the West.

Earlier this year, a Hungarian cultural association in Zakarpattia was twice attacked by arsonists, prompting the nationalist government in Budapest to talk of an intimidation campaign against local Hungarians; Kiev described the attacks – in which no one was hurt – as part of a Russian campaign to discredit Ukraine.

Despite Hungary’s complaints, Ukrainian president Petro Poroshenko has been invited to a Nato summit in Brussels in July, though talks may have to take place outside the normal format of the Ukraine-Nato commission.

Budapest may also have questions for Kiev regarding an incident on Saturday night, when Hungary scrambled fighter jets in response to the presence of an unidentified light aircraft that was detected in its airspace near Ukraine.

Smugglers of people and contraband are known to use small planes to cross from Ukraine into Hungary; in January, an ageing biplane from Ukraine landed in a frozen field in eastern Hungary carrying illegal migrants from Vietnam and Afghanistan.

1 Nine tenants evicted from north Dublin property by men in masks and dark clothing
2 92 new cases of Covid-19 confirmed in Ireland with no new deaths
3 Young women found clinging to lobster pot after spending night missing in Galway bay
4 Aaron Brady, the man who said with pride he was a cop killer
5 €2.1 million recovered after sophisticated fraud against Dublin firm foiled
Real news has value SUBSCRIBE