US says it is making progress in North Korea talks 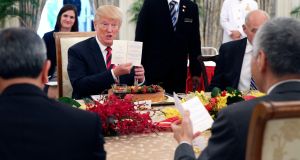 US president Donald Trump holds up a menu card during a working lunch with Singapore’s prime minister Lee Hsien-loong at the Istana. Photograph: Singapore ministry of communication/EPA

US president Donald Trump plans to depart earlier than expected from his unprecedented summit with North Korean leader Kim Jong-un, with the White House declaring that nuclear talks between the two nations have moved “more quickly than expected”.

Mr Kim and Mr Trump arrived in Singapore on Sunday for the first-ever summit between incumbent leaders of the two countries, which is scheduled for Tuesday and is aimed at ending the nuclear stand-off on the Korean peninsula.

Mr Trump had been scheduled to fly back to Washington on Wednesday morning after spending Tuesday with the North Korean leader.

But on the eve of the summit, the US leader altered his timetable, opting to return almost 15 hours earlier than scheduled.

The White House said: “The discussions between the United States and North Korea are ongoing and have moved more quickly than expected.”

It is not immediately clear what specific progress, if any, had been made in preliminary discussions between US and North Korean officials in the run-up to Tuesday’s summit.

In fact, only hours before the White House announcement, US secretary of state Mike Pompeo had seemed to lower expectations for the meeting, which Mr Trump had earlier predicted could potentially yield an on-the-spot deal to end officially the Korean War.

“We are hopeful this summit will have set the conditions for future successful talks,” Mr Pompeo said.

The summit will see the two leaders greeting each other, before a one-on-one meeting which a US official said could last up to two hours, with only translators joining them.

Great to be in Singapore, excitement in the air!

The White House said the day-long summit would also include a working lunch and a larger meeting involving aides to both leaders.

North Korea is planning to discuss “permanent and durable peacekeeping” with the US during the summit, its state news agency said.

Meanwhile, Mr Trump sent out a positive tweet on Monday morning about the prospects for the talks. “Great to be in Singapore, excitement in the air!” he tweeted, and he told media he felt “very good” about the summit.

The US leader later had a working lunch with Singaporean prime minister Lee Hsien-loong at the presidential palace of Istana.

Officials from both sides were meeting on Monday to try to narrow their differences before the talks in the tropical city-state’s luxury resort of Sentosa.

Mr Trump and Mr Kim are due to meet at 9am local time (2am Irish time) for the initial one-on-one meeting.

Mr Trump has said the aim of the talks was to establish a relationship with Mr Kim to begin a negotiating process and said he would know “in a minute” whether the talks would be a success or not.

The two countries have been enemies since the outbreak of the Korean War in 1950.

A key issue is likely to be a definition of denuclearisation. The US is seeking the complete, verifiable, irreversible denuclearisation of the Korean peninsula but most analysts believe the prospect of North Korea giving up its hard-won nuclear arsenal is unlikely.

Mr Kim was accompanied on his trip by Kim Yong-chol, vice-chairman of the central committee of the Workers’ Party of Korea, and Ri Su-yong, party vice-chairman on international affairs. His younger sister Kim Yo-jong was also spotted in Mr Kim’s entourage.

Mr Kim was not believed to have left his hotel since a meeting with Mr Hsien-loong soon after his arrival on Sunday, but he ventured out on a tour of the city on Monday evening. At one point he took a selfie with Singapore’s foreign minister, Vivian Balakrishnan.

Former NBA star Dennis Rodman arrived in Singapore late on Monday for the summit, saying he was “excited to be part of it”, although there has been no indication he would be involved in any official talks.

“It should go fairly well, but people should not expect so much for the first time,” Rodman told reporters at the airport. “The doors are opening.”