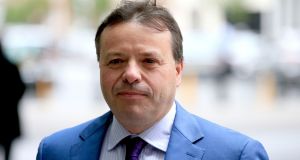 Arron Banks, a British businessman who bankrolled one of the main campaigns for Brexit, will face questions from lawmakers on Monday about his links with Russia after a report said the connections went further and deeper than previously disclosed.

Britain has said it had not seen evidence of Russian interference in its votes, but lawmakers are investigating whether the country played a role in trying to influence public opinion before the EU referendum as part of a broader inquiry into “fake news”.

Banks will appear before lawmakers in a critical week for the British government’s Brexit strategy, with prime minister Theresa May facing a series of key votes that could see a rebellion by those who want to retain closer ties with the EU.

Citing emails it received from a journalist who worked with Banks on a book, the Sunday Times said Banks and his associate Andy Wigmore had repeated contact with Russian officials both before and after the referendum campaign.

Banks had previously claimed in a book to have had only one meeting with Russian president Vladimir Putin’s envoy in London, Alexander Yakovenko, in September 2015, but the newspaper said there were at least two further meetings.

Banks told the newspaper: “I had two boozy lunches with the Russian ambassador and another cup of tea with him. Bite me.”

“It’s a convenient witch-hunt, both over Brexit and Trump,” he added, referring to allegations of Russian meddling in the 2016 US presidential election.

Banks said at the weekend that he and Wigmore would appear before UK parliament’s digital, culture, media and sport committee’s fake news inquiry, reversing a decision to pull out two days ago.

“We look forward to seeing @DamianCollins & the committee as originally planned,” he said on Twitter. Collins, a member of the ruling Conservatives, chairs the committee.

Bank had said on Friday that it was “perfectly clear that the committee, which comprises only of Remain supporting MPs is conducting a co-ordinated ‘Witch Hunt’ of Leave groups”. Banks co-founded the Leave.EU campaign that is credited with mobilising grassroots support for Brexit.

Meanwhile, Bob Geldof has given his backing to a growing campaign in the UK to force a second referendum on Brexit. Dublin-born Geldof was one of the most vocal Remain supporters in the run-up to the referendum two years ago. And now the outspoken 66-year-old has thrown his weight behind an influential movement to bring about a second referendum. Geldof said [in an interview with Hull Live]: “We have a democracy here, and the argument for a new referendum is largely around people saying, ‘I don’t like what I see. I want a change’. “It is a very complex issue, but people have always changed their minds. We have one government in for so many years, then people change their minds and it goes the other way. I think what we could have is a vote on the Brexit deal.”

Geldof’s comments follow the launch of a formal campaign for a second EU referendum last week by anti-Brexit pressure group Best For Britain. The group, which has financial support from billionaire George Soros, is calling on MPs to force a second vote on the deal secured by British prime minister Theresa May, with an option of the ballot paper of keeping the UK in the European Union.

May’s Brexit plan will begin its most severe test to date tomorrow when she asks her divided Conservatives to overturn changes made to the European Union (Withdrawal) Bill by parliament’s upper chamber.

Two Conservative lawmakers from opposites side of the Brexit divide – the pro-Remain former home secretary Amber Rudd and the leading Brexit supporter and former party leader Iain Duncan Smith – joined together yesterday to urge support for May.

“When it comes to delivering the legislation necessary to make Brexit a smooth and orderly process, we both agree that every Conservative should march in lockstep behind the prime minister as she delivers on the vote,” they said in an article in the Sunday Telegraph. – Wires