Human rights groups have accused Israel of using excessive force, which it denies 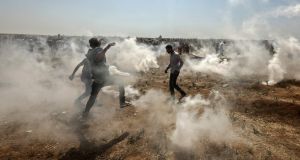 At least four Palestinians were killed and more than 600 injured as some 10,000 residents of the Gaza Strip took part in protests along the border with Israel on Friday, marking the last weekend of the Muslim holy month of Ramadan.

The Gaza health ministry said most of the injured were suffering from tear gas inhalation but more than 100 were hurt by live Israeli fire. The Israeli army said a grenade and a pipe bomb were thrown at troops and that dozens of incendiary kites, some with bombs attached, were launched over the border.

The March of Return demonstrations have seen thousands of Palestinians mass on the border over the past few months in support of the right of Palestinian refugees to return to their former homes in what is now Israel.

Human rights groups have accused Israel of using excessive force. Israel maintains it has only opened fire in self-defence or on people trying to infiltrate across the border under the cover of the protests.

Bracing for potential violence, the Israeli military deployed additional troops to the border, including special forces, intelligence and combat units, snipers and sappers. Security forces were ordered to prevent a breach of the border at any cost, while at the same time exercising maximum restraint in order to minimise the number of Palestinian casualties.

“For your own benefit, it is better that you not participate in the violent demonstrations on the fence, not attempt to breach it and not permit Hamas to turn you into a tool to advance its narrow agenda,” the leaflets read.

Palestinian media reported on Friday that Israeli drones destroyed thousands of tyres the Palestinian had placed by the border ahead of Friday’s demonstrations.

At least 120 Palestinians have been killed since the March of Return protests began on March 30th.

Ahead of Friday prayers, Hamas leader Ismail Haniyeh urged Palestinians to arrive at the border.

“Under international law, we have the right to resist the occupation by all means possible, including by military struggle, if necessary. Our goal is a dignified and peaceful life and prosperity,” he said. “The marches to the Gaza border have led to important breakthroughs on the Gaza issue. We must continue with the March of Return until the siege on Gaza is lifted.”

Israeli prime minister Binyamin Netanyahu said Hamas and Iran were behind the escalation in Gaza. “They want the number of casualties to be as high as possible so that they could say that the Jews kill Palestinians,” he said.

Mr Netanyahu said the army was working on developing nonlethal means of tackling the mass protests.

“We tried water-cannon, we tried tear gas, we tried all sorts of other devices, but none has worked against this kind of tactic,” he said. “They’re working on it, and given our record we probably will figure out something, but we haven’t gotten it yet.”