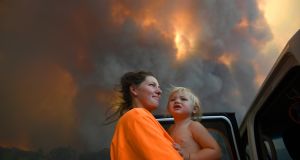 December heat records are expected to rise in Australia from Wednesday as a heatwave moves across South Australia to Victoria and New South Wales. Photograph: Dan Peled Australia And New Zealand OUT/EPA

December heat records are expected to rise in Australia from Wednesday as a heatwave moves across South Australia to Victoria and New South Wales.

Temperatures are forecast to peak in Victoria and South Australia on Friday, with Oodnadatta and Port Augusta to reach 48C, and peak in New South Wales on Saturday.

New South Wales has been placed under a total fire ban from midnight on Tuesday to midnight on Saturday as firefighters battle to contain more than 100 fires burning around the state, including the 400,000 hectare Gospers Mountain megafire in Wollemi national park in the Blue Mountains.

Extreme fire danger is forecast for greater Sydney, the Illawarra and the southern ranges on Thursday.

Tibooburra, a small town in the far north-west of NSW, has been above 40C since Monday and is expected to remain above that temperature until Christmas Day.

“This is blowing [December records] out of the water,” said Rob Taggart, senior forecaster with the Bureau of Meteorology in Sydney.

Some of the official weather stations in New South Wales, like the Bathurst agricultural station, have records dating back 108 years. The hottest ever December day on record at that station is 38.9C on December 27th, 1938, during a historic heatwave that wrought the deadly Black Friday bushfires on January 13th, 1939.

The hottest temperature ever recorded at that station was 41.5C on February 11th 2017, a day of catastrophic fire danger on which the St Ivan fire burned 55,000 hectares of bush and farmland and destroyed 35 homes around Uarbry in the upper Hunter Valley.

“The forecast predicts that Bathurst is going to exceed that December record by a pretty big margin, with a forecast top of 41C,” Taggart said. “To be having these levels of temperatures at this time of year, not in the peak of summer but in mid-December, is pretty big.”

This year was tracking to be Australia’s second hottest on record, behind 2013, based on average monthly temperature data from January to November. It would have sailed into second place had December temperatures been average.

“Australia has warmed by about 1.4C since pre-industrial times and that warming trend is increasing,” Taggart said. “So as climate scientists have been saying for 20 years, we can expect more frequent heatwaves, and more severe heatwaves, and this is certainly an example of that.”

The southern parts of South Australia, from Port Lincoln to Mount Gambier, will also be under a total fire ban tomorrow, with extreme fire danger in the Yorke Peninsula, areas outside Adelaide, and the lower south-east.

A total fire ban will also be enforced in the Wimmera region of Victoria on Wednesday, where the danger rating has been set at severe. The rest of the state, including the Mallee region, which will see the top temperatures tomorrow with Mildura to reach 43C, has a fire danger rating of very high.

“It’s going to be hot all the way through,” said Christie Johnson, duty forecaster with the Bureau of Meteorology in Victoria. – Guardian