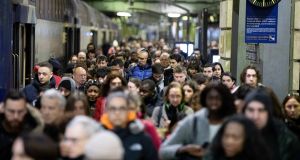 Commuters alight from a regional train during a nationwide transport workers strike at Montparnasse railway station in Paris on Tuesday. Photograph: Christophe Morin/Bloomberg

“There will be no truce declared for Christmas,” Rachel Picard, director-general of Voyages SNCF, the state-owned railway, has announced, referring to the transport strikes that continue for a 14th day in France on Wednesday.

Millions of French people planned to travel home for Christmas this weekend. But, Ms Picard said, between 60 and 70 per cent of SNCF employees will still be on strike. “Train drivers are a scarce resource,” she added.

More than three-quarters of train drivers and nearly two-thirds of ticket collectors remained on strike on Tuesday. The SNCF nonetheless promises that “between 50 and 60 per cent of trains” will run next weekend.

Hundreds of thousands of protesters took to the streets again on Tuesday in opposition to plans by president Emmanuel Macron to reform the country’s pension system.

The interior ministry estimated the total turnout at 615,000, down from the 806,000 who demonstrated on December 5th, the first major day of action against the controversial reforms. Unions suggested the final figure was likely to be nearer to one million people.

Mr Macron wants to introduce a “universal” pension system based on points, in place of the more than 40 different pension schemes currently operating in France. Workers say the government wants to make them work longer for less.

In an indication of worse to come, power cuts have been reported in Lyon, the Bordeaux region and on Tuesday in Nice. Members of the neo-Communist CGT cut the electricity supply to the Thiers train station, Nice-Étoile shopping centre and palais de justice for half an hour.

“We are angry and the government must hear us,” Gérard Ré, the departmental secretary of the CGT, told France Bleu Azur television.

On the sidelines of the protest march across Paris, CGT secretary-general Philippe Martinez said that while “power cuts are the result of the strike, they are targeted”.

Mr Martinez said there might be “accidental” power cuts in some places, “but those which are targeted are CAC40 [leading companies on the French bourse]”.

Three in 10 high-speed TGVs, one in four trains in the Paris region, four in 10 regional trains and one in six inter-city trains will run on Wednesday.

Only two metro lines in Paris – 1 and 14, which are fully automated – will function normally on Wednesday. There will be no traffic on eight lines, and four lines will function only at rush hour. Suburban RER trains remain severely disrupted. Only 50 per cent of buses in the capital will run.

Prime minister Édouard Philippe expressed his “total determination” to carry out the pension reform. Mr Philippe will continue negotiations with social partners on Wednesday and Thursday.