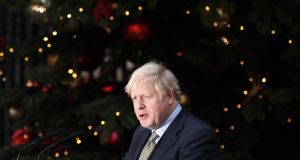 Britain’s Labour Party leadership has apologised for its dismal performance in last week’s general election but said Brexit and media hostility was also to blame.

Party leader Jeremy Corbyn said he took responsibility for the result but claimed that Labour’s policies were popular and that the party won the argument on issues such as climate change and austerity.

Mr Corbyn said after the election, which saw Labour suffer its worst defeat since 1935, that he would step down and shadow chancellor John McDonnell said he expected a leadership election to take place within eight or 10 weeks.

“Let’s take it on the chin. I own this disaster,” Mr McDonnell said. “So I apologise not just to all those wonderful Labour MPs who’ve lost their seats who worked so hard – I apologise to all our campaigners, but most of all I apologise to those people who desperately need a Labour government. And yes, if anyone’s to blame, it is me – full stop.”

Conservative sources have suggested that Mr Johnson plans to have a more comprehensive reshuffle in February following an overhaul of Whitehall that could see a number of ministries merged or abolished.

MPs return to Westminster on Tuesday, when they will elect the speaker and begin the process of swearing in before Queen Elizabeth formally opens parliament on Thursday.

Mr Johnson is expected to bring his Withdrawal Agreement Bill, which legislates for Brexit, back to parliament on Friday.

Scotland’s first minister, Nicola Sturgeon, said on Sunday that her Scottish National Party’s performance in last week’s election, winning 48 of the country’s 59 seats, gave her a mandate for a second independence referendum, something Mr Johnson’s government has ruled out.

“They will rage against reality for as long as they can but Scotland has chosen a very different kind of future than most of the rest of the UK, and they can’t stand in the way of the will of the Scottish people. Fundamentally democracy has to be offered and respected,” she said.

Mr Smith has set January 13th as the deadline for a deal to restore powersharing, saying that if there is no agreement by then he is obliged to call Assembly elections.

After the loss of two seats, particularly Nigel Dodds’s in North Belfast, London and Dublin believe the DUP would be anxious about facing into an Assembly election in January or February. Although Sinn Féin gained North Belfast it also suffered reverses, losing Foyle and seeing its overall vote decrease. It too might have concerns about an election that could see more centre ground parties such as Alliance and the SDLP capitalise on their successes in the Westminster poll – the SDLP winning two seats, Alliance taking one in North Down.

DUP leader Arlene Foster said on Sunday that the “sustainability of the institutions” must be central to the talks “so never again can one party hold the rest of Northern Ireland to ransom”.

Sinn Féin deputy leader Michelle O’Neill said the electorate had “rejected the DUP and their ill-fated toxic pact with the Tories, which impeded political progress for more than two years”.